The development of new brain stimulation devices, new stimulation designs and artificial intelligence is accelerating advances in the field of brain stimulation research. University of Otago Professor Dirk de Ridder says he has never been so excited about the potential to develop new treatments for debilitating conditions. 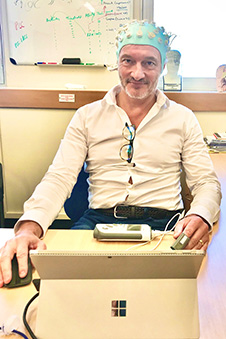 Imagine your brain was electrically stimulated and you were suddenly able to perform cognitive tasks at a higher level.

After years of research into methods of disrupting harmful brain activity to counteract conditions such as pain, tinnitus, depression and addiction, Prof Dirk de Ridder and his team are coming at the problem from the opposite direction.

Rather than interfere with abnormal brain patterns, they are using powerful new software and hardware to reinforce normal activity.

And the early results are rather startling.

In research yet to be published, volunteers with no underlying conditions performed cognitive tests before and after receiving electrical brain stimulation specifically designed for the study.

“They go faster, without making more mistakes, which means that their brain actually becomes more efficient, which is very, very interesting because we've never seen that before - that we can improve normal functioning.” 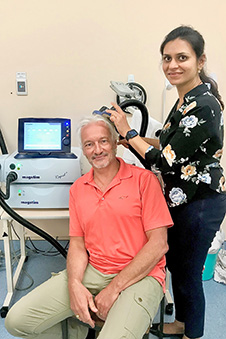 The research has the potential to open up new approaches where positive brain activity is boosted to over-ride the effects of harmful patterns.

The techniques will now be investigated in studies involving patients with Alzheimer's disease, tinnitus and chronic pain.

“Traditionally with stimulation you could relatively easily disrupt abnormal activity or connectivity for somebody who has, for example, pain, tinnitus, depression or addiction. You try to disrupt the abnormal activity, assuming that the brain will automatically go back to normal. But that doesn't always seem to happen.

“What we are looking at now is: what if we disrupt it, followed by rebuilding normal activity or trying to enhance normal activity? And this is only possible by developing new stimulation designs which basically mimic normal activity in the brain. This new technology allows us to be very creative. What we can do now is incomparable to what we could do even a couple of years ago.”

The Professor of Neurosurgery, who leads a research team in the Department of Surgical Sciences, has been involved in neuromodulation research for 20 years.

This work principally involves electrically or magnetically stimulating the brain or using neuro-feedback techniques to retrain the brain.

He paid tribute to his colleague Dr Divya Adhia who had driven an increase in research output after joining the Dunedin BRAI3N research team.

“Without Divya, I would be creating a lot of new ideas, but few would be executed. We form a perfect team. My brain constantly overflows with ideas, probably 99 of 100 of which are not good, but Divya manages to filter the good ones and turns these ideas into executable research.”

The field has been limited by the available technology, but new stimulation devices and the use of powerful artificial intelligence has led to a massive leap forward.

“We're really at the point where the research is going to explode in all directions,” Professor de Ridder says.

One of his team’s numerous collaborations across the University is with the Department of Information Science where researchers such as Assoc Prof Jeremiah Deng provide the processing capability that has led to vastly deeper levels of pattern recognition of brain signals.

“They use artificial intelligence to tell us what is abnormal in the brain which is much better because previously we had to come up with a hypothesis. It was lots of trial and error to find those connections whereas now we just have artificial intelligence to tell us what's wrong.” Our job is to tell what the discovered pattern means, and to translate it in a potential treatment.

Other key collaborators include Professor Paul Glue, from the Department of Psychological Medicine, whose work includes the pharmacology of drug treatments in psychiatry and the development of novel therapeutics for affective disorders.

“For example, by adding medication such as psychoactive substances, we can hopefully further improve this stimulation technique by getting the brain in a more responsive state.”

“Sometimes people think that we are in an ivory tower, developing new stuff that has no real relevance. But now, with the current innovations, there is a lot of potential to do move forward and a lot faster than we've ever been able to.

Before the COVID-19 pandemic, Professor de Ridder travelled regularly to Belgium where the clinical component of the BRAI3N research unit is located, due to a large population base.

“Whenever something is shown to work, based on the research here in New Zealand, we can immediately translate that to clinical practice in Belgium,” he explains. “Unfortunately, a clinic like this is unviable here in Dunedin due to the small population size. And whenever we fail to help someone in the clinic, this triggers new ideas for adjusting or developing new treatments, subsequently tested here in Otago.”

The work in Belgium is continuing and he participates via weekly Zoom clinics. In the coming year studies will be undertaken on pain, tinnitus and depression in Otago and translated to the clinic.

“The beauty of this university is that we have specialists in virtually everything and they are very happy to collaborate. For example, in a joint effort with the department of anatomy and pharmacology a novel approach to neuromodulation has been developed in rats. We call it reconditioning stimulation, and if the result proves beneficial, we will develop a human translation of it in Bonn in collaboration with Professor Maciaczyk, who works both here at Otago and at the University of Bonn in Germany.

“I think it's very exciting times to be involved in this kind of neuroscience right now.”