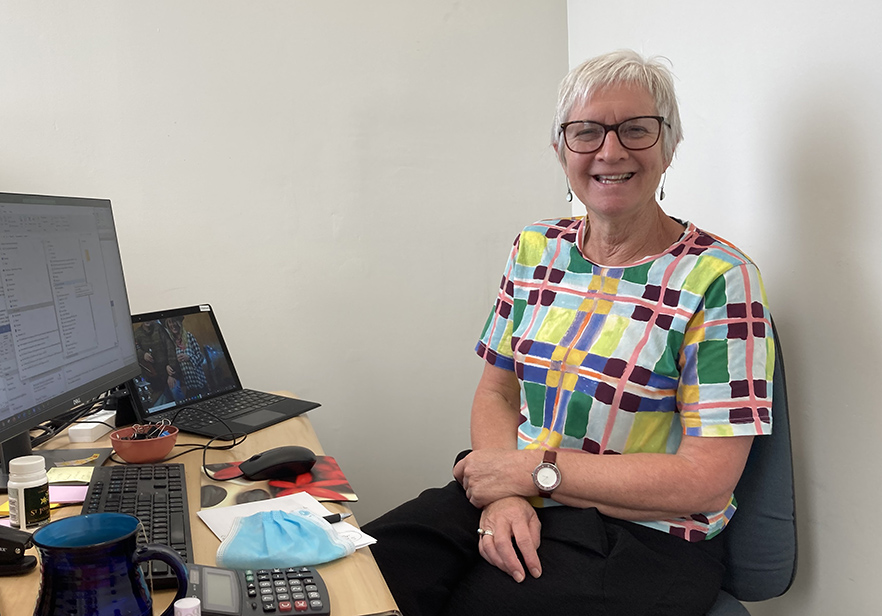 Lenore Armstrong: unflappable, always smiling, and known for her readiness to go above and beyond.

Her computer screen is full of numbers but for Finance Associate Lenore Armstrong the job is just as much about people.

A calm and friendly presence in the Departments of Medicine and Surgical Sciences, Lenore is known for her ability to forge relationships and smooth a path for colleagues through complex financial waters.

Her contribution over almost three decades has now been recognised with the award of the Dunedin School of Medicine’s 2021 Dean’s Medal for Excellence in Service.

“She is unflappable, always smiling and known for her readiness to go above and beyond,” Head of Department Professor Rachael Taylor says.

Sitting in her office on the 9th floor of Dunedin Hospital, Lenore gives an insight in her methods. In the case of managing multiple grants and researcher salaries for a staff member it is a juggling act which starts with calculations and ends with a conversation.

“I work out the money side and then I go and talk to the people. And as long as I've shown them exactly where they're at, they feel comfortable and happy. You’re best to get people on side because then they'll tell you things and then you can give them back what they need.”

Her path to the world of spreadsheets and research grants was an unusual one after she initially joined the department as research nurse having trained as a community nurse.

As a member of Professor John Campbell’s research group in Older People’s Health, part of her role involved travelling between Invercargill and Oamaru recruiting over-80s for studies.

“I had to go and knock on doors and cold call. That's very hard work because that age group have never done that type of thing before… You’ve got to, if I can say that, win people over and get them to like you. If they like you, then they'll want to join. But it was a lot of work.”

When a gap arose in the finance team during a quiet period for research, Professor Campbell asked Lenore if she was interested in the job.

After agreeing, she found herself thrown in at the deep end three months later as cover when the finance manager for what was then known as the Department of Medical and Surgical Sciences went on extended leave. It was up to her to figure out the finer points of the role, which she then held for the next 10 years.

In 2009 the departments were reorganised and Lenore became Finance Manager for the newly created Department of Medicine.

Her time in this environment has given her great respect for the joint-clinical staff who are balancing their clinical duties with their academic work.

“I've enjoyed working with them. Most the time,” she laughs. “Clinicians are a tough bunch. But if you get on with them, then you realise what their needs are.”

Those needs included clear and concise information, sometimes provided under pressure in a short window of available time to a doctor whose main focus that day was surgery and not finances.

“My approach is ‘Just relax and I will give you the information you need’. If I get hit by a bus I want you down there looking after me.”

Head of Department Professor Taylor describes Lenore as “an absolutely critical member of our staff.”

“The institutional knowledge she provides cannot be underestimated – simply put we could be lost without her.”