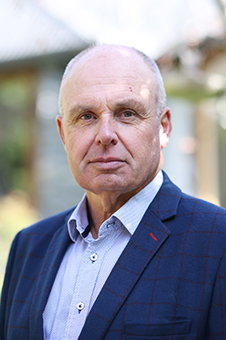 That stellar resume has now been rewarded, with Professor Frizelle, from the University of Otago, Christchurch’s, Department of Surgery, awarded an Officer of the New Zealand Order of Merit ONZM for services to health in this week’s Queen’s Birthday Honours.

“It’s all been humbling and a bit unexpected,” says Professor Frizelle.

“It’s very nice to be recognised, but I very much feel this recognition is not just for me alone. It’s a reward for the family who’ve stood beside me and also my colleagues who’ve stood alongside me, who’ve provided support and helped carry the load when I’ve been busy attending to things elsewhere.”

Professor Frizelle became Aotearoa New Zealand’s first ever professor of Colorectal Surgery in 2000 and has maintained a leadership role in his field, nationally and internationally, for several decades.

He was the first surgeon in the country to launch a service for advanced pelvic malignancy, and has been recognised worldwide for his groundbreaking work in the field of bowel cancer causation.

“Like most surgeons, you try different areas and see what’s the best fit. And as I continued to practice and train, I became aware of the deficit for treating people for what is a relatively common problem, bowel cancer.”

One of four children raised in Upper Hutt to Irish immigrant parents, medicine emerged as a possible career pathway during Professor Frizelle’s last year at St Pat’s Silverstream. Gaining sufficient marks in his university scholarship exams to earn preferential entry for medicine, he was accepted for medicine down in Dunedin following a bridging year at Victoria University.

Graduating from the University of Otago with a BMedSci in pharmacology in 1983 and then a MBChB in 1985, Professor Frizelle set his sights on a career in surgery.

Upon completion of his general surgical training in 1992, he undertook a locum position at Dunedin hospital as a general and vascular surgeon while completing his Masters in Medical Science, then applying to hospitals overseas to gain much-needed international experience.

While filling in for a weekend in Ōamaru he received a phone call from someone asking if he wanted to fill a training post in colorectal surgery at the prestigious Mayo Clinic in the USA, arguably one of the world’s best hospitals.

“I thought this would be one of my friends … pulling my leg,” says Professor Frizelle.

When the promised paperwork arrived, he then realised it wasn’t a prank, but a genuine offer. He eventually spent a year at the Mayo Clinic before travelling to Britain to learn laparoscopic surgery.

“By that time we were getting homesick, and we had our daughter by then, so we decided to go home. We have no regrets, it was the right decision,” Says Professor Frizelle.

Settling back at Christchurch hospital in 1996, Professor Frizelle recognised the need for advanced research into colorectal cancer, embarking on a highly successful career within the University of Otago, Christchurch’s, Department of Surgery – including 13 years as Head of Department until 2019.

Professor Frizelle says he’s proud of the work he and his research colleagues have produced, particularly relating to the aetiology of sporadic bowel cancer and the influences of bacteria on disease risk.

“Early onset colorectal cancer in patients under 50 years of age is sadly becoming more common. We don’t really understand why this is, and the work myself, Associate Professor Jackie Keenan, Dr Rachel Purcell and our team (Dr Andrew McCombie, Dr Tamara Glyn, Dr Chris Wakeman and Professor Tim Eglinton) are doing in this area has impact and is therefore important.

“Questions we are trying to answer include what causes sporadic bowel cancer and what is the role of the gut bacteria causing it? What actually alters the bacteria in the gut? How much influence does environment play in early-onset bowel cancer risk? We need to find out why younger people are getting it and what environmental factors are driving it.”

“It’s reassuring having that acknowledgment from international colleagues that this work is important.”

Professor Frizelle has also been an active teacher of the next generation of surgeons – involved in the development of post-fellowship colorectal training and as a Royal Australasian College of Surgeons examiner for 11 years. He was involved in the Post-Fellowship Training board in colorectal surgery for 16 years and held most board positions over that time, including Chair.

“We have excellent surgeons and they are doing a marvellous job. It’s taken 25 years to get there, but the doctors who do colorectal surgery in this country now are as good as anywhere.”

Since the mid-nineties he’s also been a vocal and oftentimes outspoken advocate for the introduction of national bowel cancer screening in Aotearoa New Zealand, and a regular media face behind the push to have a screening programme introduced here.

“We lagged behind nearly all other western countries in not screening for colorectal cancer, despite the incidence of bowel cancer in New Zealand being among the highest worldwide. My job as an advocate was to break the inertia.

“Being the “squeaky wheel” wasn’t always an easy choice. It took time, commitment and also fatigue, fighting the resistance to change at government level. It took many years to get political engagement. People struggle with change of course, and we were trying to promote an expensive commitment requiring a major shift in thinking and action. Achieving such change in the medico-political world isn’t easy,” says Professor Frizelle.

He says he never sought to be part of the formal national bowel cancer screening group at the time, believing that to be an advocate – being able to encourage and cajole people into “doing what’s needed” from the outside, where he could speak more honestly as a clinician, was the best place to be.
So, does he feel the national screening programme, now finally up and running, is delivering?

“It’s great to now have it in place, no doubt about that. But it’s not perfect by any means. I’d like to see more progress around how we screen, who we screen and when. We need flexible sigmoidoscopy rolled out for all patients under 50 in New Zealand with rectal bleeding. The screening age should also be

lowered from 60 to 50 and better ways found to target Māori, Pasifika and other high-risk patients.”

“Doctors and surgeons are part of an international mobile workforce, and people want to work where they feel well-resourced and supported. That’s not always the case here. One of the things about working in New Zealand is the realisation you’re not going to have the resources to do your job or make the money you’ll make overseas. We risk losing some of our brightest, not just to Australia but further afield and that’s something we need to seriously address.”

Outside his commitments as a surgeon, academic researcher (with over 470 publications), husband, and father of two adult daughters, Professor Frizelle somehow fits time into his 7am–7pm work days to be a medical adviser for Bowel Cancer New Zealand, a volunteer surgeon and board member at the Canterbury Charity Hospital, Chair of The Christchurch Cancer Foundation, editor of the New Zealand Medical Journal, Chair of the National Prostate Cancer Registry, board member and trustee of the Medical Assurance Society, and patron of the Canterbury Stoma Society.

He has also given more than 250 presentations at national and international scientific meetings. Next month he’s off to deliver another one – the keynote British Journal of Surgery lecture at the Association of Coloproctology of Great Britain and Ireland annual meeting in Edinburgh.

But as to what gets him out of bed each day – his answer is simple.

In all honesty, the thing I get most pleasure from is seeing patients every day and treating them. As a clinician I love that human interaction, engaging with my patients on a personal level. It’s an absolute privilege to be in a position where I can help them.”