Dr Branko Sijnja: A lifetime of service to rural health 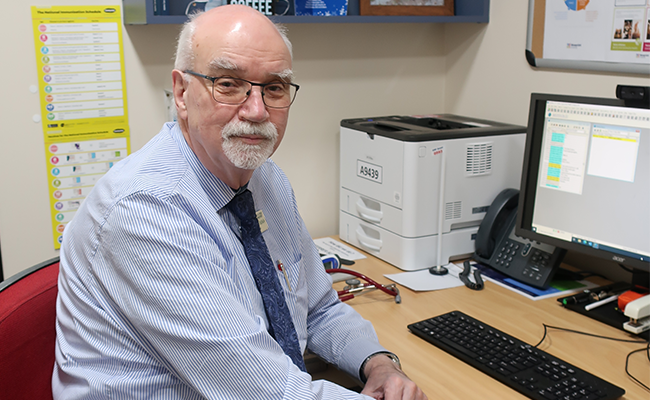 Dr Branko Sijnja has been recognised with the Peter Snow Memorial Award for a lifetime of service to rural health as a GP and educator.

Dr Sijnja has been a rural GP for more than 40 years and was influential in the establishment of Clutha Health First, which transformed healthcare in South Otago.

“It's very pleasing to get the recognition but also humbling because even though you go through life with a lot of challenges you're never alone. You do it with people around you,” Dr Sijnja says.

He is still working as a GP in Balclutha, driving there from his Dunedin home, three days a week.

The award comes as Dr Sijnja prepares to step away from his role at Otago Medical School at the age of 75. He has been with the University for 12 years as Director of the University’s Rural Medical Immersion Programme.

I chose General Practice because it's so variable. It's so unpredictable. You see all sorts of patients, all ages, with all conditions.

In that time he has thoroughly enjoyed helping train the next generation of rural GPs, who spend their entire fifth year of medical school on placement.

“I've enjoyed the students. They're really great. They step away from the mainstream of education for a year and learn in the rural environment like apprentices. They learn active, hands-on medicine. They become very good with actually knowing what to do.”

Dr Sijnja began his career as a doctor in 1974 and worked in hospitals in New Zealand, Perthshire in Scotland before returning to this country to work as a GP in Balclutha in 1980. He and his wife Heather thought South Otago, where Dr Sijnja had spent some time on placement, looked like a great place to live and raise their young son Arend.

“It's a nice size town. People know you. They recognise you. They're helpful. That make you feel at home. I chose General Practice because it's so variable. It's so unpredictable. You see all sorts of patients, all ages, with all conditions. And that's really what attracted me, with the continuity of care you get to know people so well. You see them more than once and you get to get to know them and their families.”

Over the past four decades he has delivered more than 700 babies – many of them in the early hours of the morning – including a second generation: “I’ve managed to deliver the child of a child I delivered so that was a good milestone.”

In 1998 Dr Sijnja was involved in the establishment of Clutha Health First, a new-look healthcare provider which offered hospital, community and general practice services in Balclutha.

A threat to close Balclutha Hospital in 1992 had galvanised the community into action but it became apparent the old hospital was not viable to maintain and a new model of care in purpose-built premises was needed.

“We got the okay to do something in March and we had to be up and running by the first of December having built the buildings so it was put together at a hell of a rate of knots. We've modified it three times since but it’s looking good.”.

He remains involved in the governance of Clutha Health First and sits on the Board of the Clutha Community Health Company Limited.

Dr Sijnja says he will keep working “until my brain goes soft”.

“And then I might have to retire. I like working with my hands so I’ll do a bit of woodwork and other things.”

“Whenever he comes to the conferences you can always spot him as he’s the one with the crowd of young doctors around him who know him through the training scheme- he’s usually telling them tales and there’s always lots of laughter,” she says.

In 2021, Dr Sijnja was awarded Distinguished Fellowship of the Royal New Zealand College of General Practitioners, which recognises Fellows of the College who have made sustained

The Peter Snow Memorial Award was set up to honour the life and work of Dr Peter Snow who passed away in March 2006. Dr Snow was a rural general practitioner based in Tapanui. As well as caring for his patients, Dr Snow was Past-President of the Royal New Zealand College of General Practitioners and was a member of the Otago Hospital Board and District Health Board.

He was enthusiastic and active in seeking knowledge to improve the health and safety of rural communities. His work contributed to the identification of the chronic fatigue syndrome and he was influential in raising safety awareness on issues related to farming accidents.