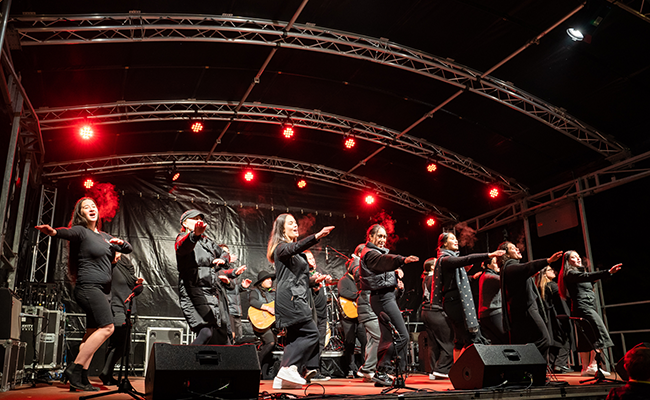 A warm atmosphere bubbling with life kept the midwinter chill at bay as the University held its first Matariki Night Market.

The outdoor market on the Dunedin campus featured kai stalls, workshops, Kapa Haka and a stage with live music.

Karamea Pewhairangi, a member of the organising committee, paid tribute to everyone who helped make the event a success. 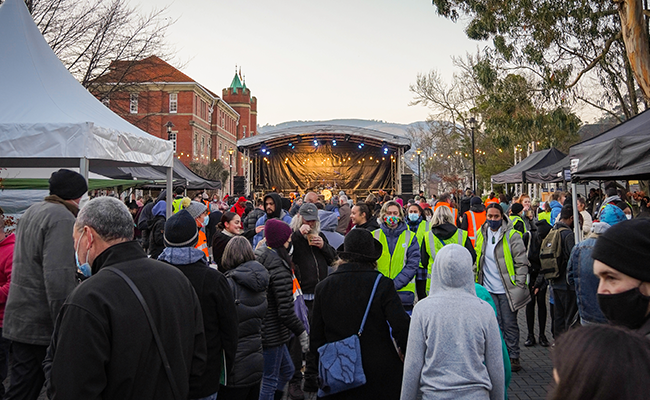 "I feel very grateful for everyone that had a hand in the event - our volunteers who made everything go smoothly, our stall holders who agreed to come along and take part, all of the performers and also the MCs Shakayla and Jade. We weren’t expecting such a big turnout and if it wasn’t for everyone who took part, we wouldn’t have been able to do it.

The Māori Centre, Pacific Island Centre and Te Rōpū Māori provided an atmosphere that was centred around Manaakitanga by offering a space for Kaumātua and performers to keep warm, Karamea says 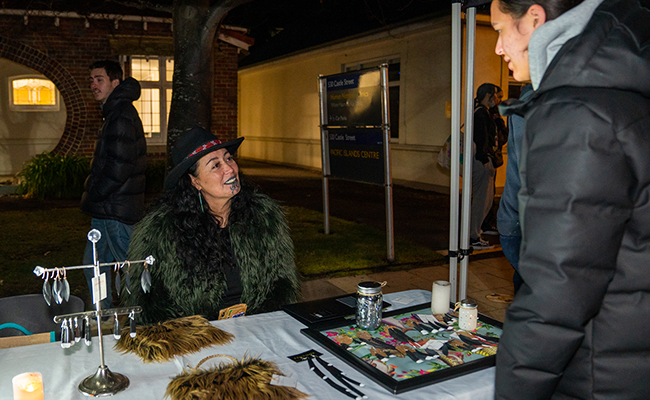 “It was a very busy night for our stall holders, despite the temperatures dropping there was a great turnout. A lot of the stall holders sold out, while others had a lot of engagement from the crowd.”

Pounamu and carvings were on sale alongside workshops in Māori art and weaving. Māori fashion designers displayed their work and a massage workshop was held indoors.

The hāngī was a “huge hit” with 250 tickets pre-sold and demand outstripping supply.

“We are unsure at this point if this will be an ongoing event but we now know what needs to be done and have provided a blue print for future event planners."

School of Biomedical Sciences staff gathered in the early morning light at the Water of Leith to acknowledge and celebrate this year’s Matariki.

The event included karakia (prayers), waiata (songs) and speeches which recognized the School, its staff and the experiences of the University as a whole over the past year. 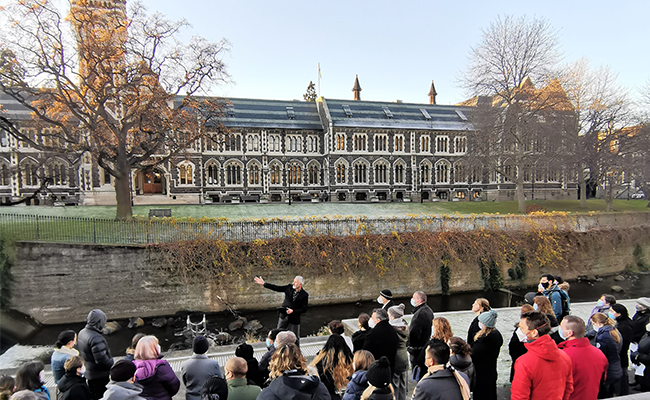 Peter Williamson, the Māori Strategic Framework Facilitator of the School, opened and closed the event.

Dean of the School, Professor Neil Gemmell, spoke about the challenges the School had faced and that the successful outcomes they had produced were “testimony to staffs continued flexibility and pakeke mahi (hard work)”.

Peter Williamson, the Māori Strategic Framework Facilitator of the School, opened and closed the event.

He acknowledged the virtue of gathering under the shade of Kapukataumahaka (Mt Cargill) where “we are blessed and energised by the flowing waters of Owheo (the Leith).”

“Matariki and her daughters are a potent tohu [sign] we can achieve lofty goals in the year ahead,” Peter says. 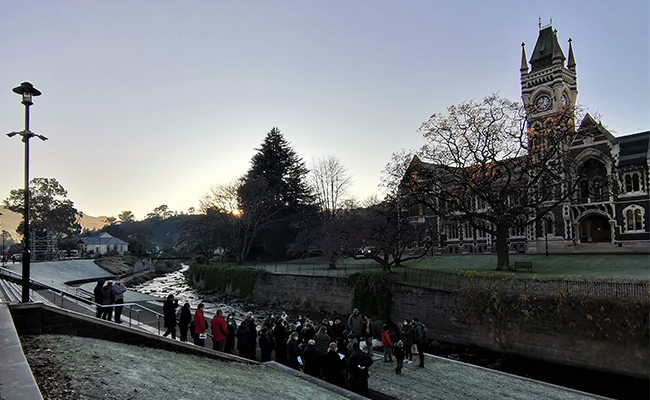 Professor Gemmell shared a similar sentiment, saying that “Matariki provided an opportunity for remembrance, an opportunity to reflect on the School’s gratitude for the past year, and for staff to look forward to the next year with optimism.”

One of the waiata sung by staff was Matariki, by Rahera Davies, which supported Peter’s korero as it brought attention to the significance of the Matariki cluster and the nine stars Pōhutukawa, Waitī, Waitā, Waipuna-ā-rangi, Tupuānuku, Tupuārangi, Ururangi, and Hiwa-i-te-rangi that make up the constellation.

The formal portion of the event concluded with a karakia before the attending staff adjourned to the Department of Biochemistry’s George Peterson room for further korero and shared kai (food).

“A small but successful event for the School, that we will seek to build on in coming years,” Professor Gemmell says.

“We look forward to what the oncoming year may bring, not only for the School, but for the wider University as well.”

The celebrations at the Pōneke campus opened on Monday 13 June with a Ngā Whetu Showcase – an evening of questions and answers about Matariki with Toa Waaka, a member of SMART, the Māori astronomy organisation, and Māori Strategic Framework Manager at the University of Otago, Wellington. The discussion was followed by shared kai and performances from staff and students. 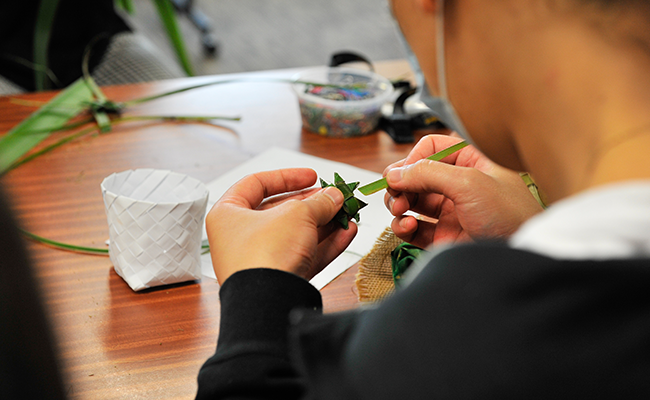 Star making at a Matariki workshop.

Staff and students were able to move around different stations, weaving flax stars or baskets, learning about the nine stars and reflecting on one of them, watching a video by Rangi Mātāmua, finding out about Te Waka a Maui, of which Matariki is a part, and singing and relaxing. 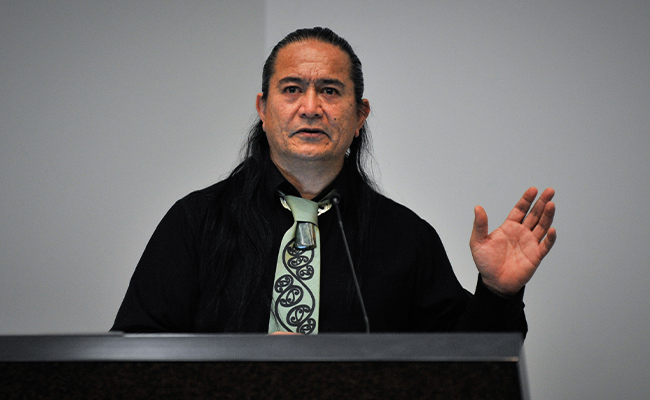 Toa Waaka talks to staff and students about Matariki.

Staff also celebrated the start of the Māori New Year with a house warming event at the new office in Brandon Street in the Wellington CBD on 16 June. 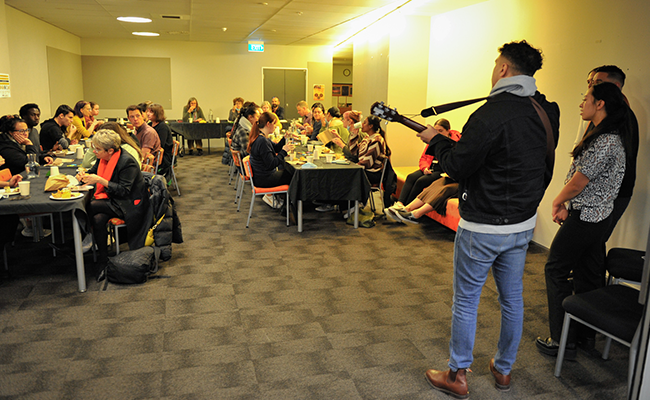 Students entertain staff and students with waiata at the Ngā Whetu Showcase.

He also acknowledged the enormous contribution to organising and facilitating the events made by Associate Professor Bridget Robson, Associate Dean Māori.