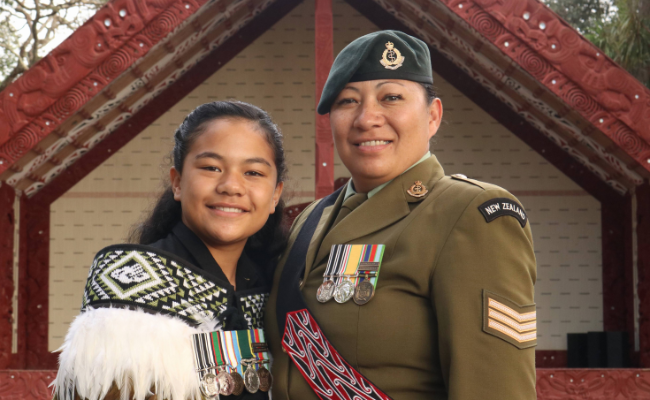 Leigh (right) with her daughter Mānea. Image courtesy of The Northern Advocate.

Being awarded the prestigious Ngārimu VC and Māori Battalion Scholarship has humbled a University of Otago medical student who has defied heartbreak to make her dream a reality.

Despite these, and years of hard work in between, the third-year Bachelor of Medicine Bachelor of Surgery student and Platoon Sergeant with the New Zealand Defence Force, says she has only ever wanted to be of service.

“This scholarship is associated with academic prestige and courageous fortitude, and I am humbled to be named alongside so many respected past recipients. It has certainly left me truly speechless.”

The scholarship was founded in 1943 to commemorate the bravery of Ngārimu, and the other members of the 28th Māori Battalion, whose lives had been lost in World War II.

Out of nine recipients per year, only three are given to undergraduate students.

Usually, the scholarship is awarded at Parliament but this year the ceremony took place at Te Whare Rūnanga, Waitangi Treaty Grounds, where the battalion departed from.

“The whare we were in was also special, my grandfather was one of the carvers and my grandmother weaved the tukutuku on the walls.

"The name 28th (Māori) Battalion and Ngārimu VC are synonymous with sacrifice, they denote hardship, trauma, and loss. With it they also denote mana, pride, tikanga, courage, commitment and outstanding examples of leadership," she says.

“In what could only be described as the scariest and hardest moments of any soldiers lives their particular examples forever shaped the projection of Māori into the future and from their moments of extraordinary heroism the worlds eyes fell on our whenua, and they have never left.”

The mum of three has served 18 years and counting in the NZ Defence Force, currently serving as Platoon Sergeant, training soldiers in the summer.

“The military taught me more lessons than I at times wanted to learn, but my service has given me more experiences than I could have possibly imagined.”

Even with her years of training and military experience, including helping in the aftermath of the 2011 Christchurch earthquake, there was one event Leigh could never have been fully prepared for.

Leigh's favourite part of her military career was deployment, something she had to let go of after the death of her partner.

In early 2018 at Cable Bay she lost her partner and soulmate.

Her partner Wairongoa took their tamariki and their niece and nephew up to Cape Reinga to celebrate their daughter Mānea’s birthday.

On the way back, they decided to stop off at Cable Bay for a swim.

While playing with a boogie board in the shallow waves, Leigh’s twin sons Tawhiri and Sam were swept out to sea by a surprise rip tide. Tawhiri held tightly to Sam and kept him afloat.

“Mānea all of 11 years old heard her brothers screams, jumped in to save her brothers but was pulled under. Wairongoa tried to save her and drowned. All four were pulled out. Mānea was revived and is here with us today. But my daughter’s birthday is my partner’s last. He and I gave her life on the same day 11 years apart.”

Leigh and her family took a year to focus on their healing, but then with the deployment aspect of her career on the backburner and her family drastically altered for life, she had some decisions to make.

She recalled being told in school, by a teacher she admired, that while she was a nice kid, she wouldn’t make it as a doctor.

“That had been a blow. I had always wanted to be a doctor but thought I wouldn’t make it.”

But she had finally reached a moment in her life where fear of failure no longer phased her, so with her whānau, close mates and boss’ support she applied for the Otago Medical School and got in.

With children in tow, family support and fierce determination, Leigh arrived in Dunedin ready to take this new chapter with both hands.

Starting in 2020 at the beginning of the COVID-19 pandemic threw another curve ball her way.

“I had three kids to home-school and only two computers at home. The kids all had zoom classes and so I couldn’t be online at the same time. My study would start at 9pm and finish at 3am. I had to work out of sync with the kids so I didn’t disrupt their learning.

“I needed extra help with chemistry and I got in touch with a tutor from the Māori Centre who was now based in England - the timing really worked with my late night study hours. I had another amazing lecturer who would give me one-on-one help in the evening, painfully taking me through everything I needed to know,” laughs Leigh. 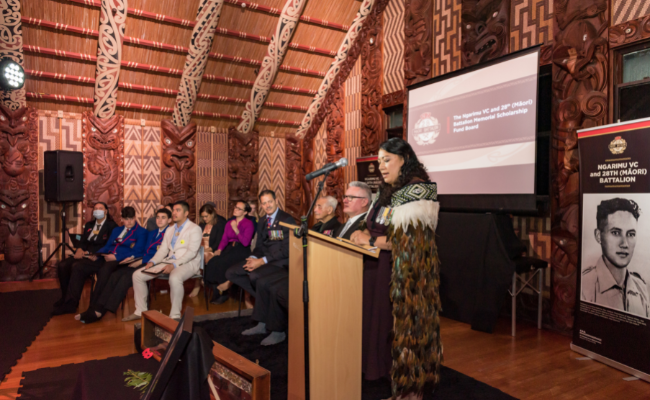 Giving her acceptance speech for the Ngārimu VC and Māori Battalion Scholarship at Waitangi earlier this year.

Now in third year she is a recipient of the 2021 Dean’s Commendation, Māori Health Representative on the Students of Rural Health Association, Mataamua for the Torea Whānau through the Māori Centre, she mentors other students, is still a Platoon Sergeant in Dunedin and a māmā to three teenagers.

Leigh is looking forward to 2023 where she will begin a new journey in her study working hands-on with patients and continuing to make a difference to people’s lives.

“Wherever my journey leads me, I aim to be of service, to advocate of those who need help, to use the lessons afforded to me by my experiences.”

Her overall goal, however, is simple: to be the example of what hard work looks like.

“To show that even in our greatest of despairs and weaknesses, we can be stronger beyond measure. This goal is for my tamariki and each day is for them. That they will know irrespective of the experiences which have laid them low, they have the ability to carve a place for themselves and that my steps will forever show them how.