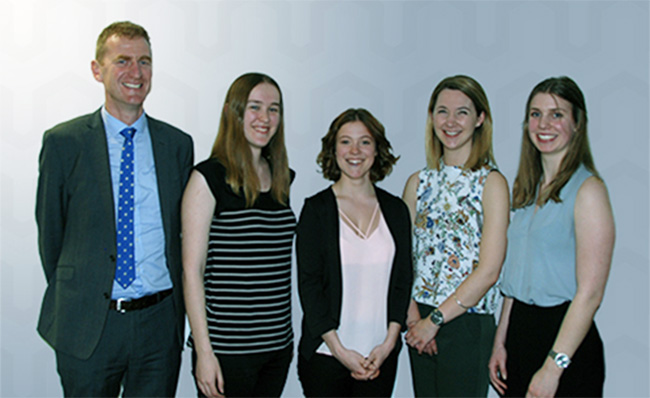 Procrastinating during exam season turned out to be quite lucrative for Kiri Lenagh-Glue, who admits that although it’s “a little bit embarrassing” to admit she was putting off study by searching through the Otago scholarships database, it definitely all worked out.

On the merits of her studies and passion for computer science, Kiri has received a scholarship from the Government Communications Security Bureau (GCSB) for women studying STEM fields - science, technology, engineering and mathematics - at tertiary level.

The scholarship awards the winning students with $10,000 towards their studies in STEM subjects at New Zealand universities. 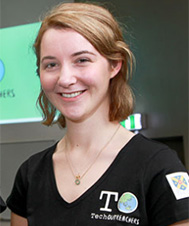 Kiri during the World's Challenge Challenge in May, 2017.

Kiri is a third-year student studying a double degree in Computer Science and Classics (“very little cross-over in those two degrees!”) with two years to go.

Kiri’s interest in addressing the gender inequality issues prevalent in the STEM field began in her second year of university, when she and some friends realised how few women had returned after the first year of Computer Science, and they decided to do something about it.

They created the group Comp Girls Otago, which works as a support and networking group for women in the department, ranging from first year to postgraduate students, as well as lecturers.

“We’ve been met with so much support,” says Kiri.

“We’ve had speakers in from companies all over New Zealand and been invited to visit numerous headquarters.”

This year will be Kiri’s third year as leader, and as two of the other leaders have graduated, Kiri says she is really looking forward to seeing the new leaders taking up the mantle.

“The main goal with Comp Girls Otago was to try to combat the feeling of isolation and bring a real sense of community amongst the women in the department, to help stop women leaving the field.”

This made Kiri the perfect candidate for the GCSB Women in STEM scholarship, which is intended to encourage more women to study STEM subjects and to inspire them to consider a career in cyber security.

After her application detailing her involvement in technology and cyber security was successful, Kiri was shortlisted for the scholarship and invited to Wellington for individual interviews with a panel, which included Director Andrew Hampton.

“It was really nice that two of my interviewers were women at the organisation – it allowed me to ask questions that were more pertinent to my own experiences.”

Kiri calls it “gratifying” to have her work rewarded at such a high level and would like to thank all the lecturers from the Computer Science department for their help and assistance, “especially Associate Professor Zhiyi Huang and lecturer Stefanie Zollmann.”

Kiri says she has had some incredible experiences this year, such as working with Google to host an event on campus; competing in the international competition “the World’s Challenge Challenge” with the idea to promote technology education in developing countries; and being a finalist in the Computer Science category for New Zealand’s Top Student.

“Aside from my work within the Computer Science department, I am also heavily involved in volunteering around the campus and my community.”

Although she says it’s too soon to tell whether she will pursue a career in cyber security, Kiri says receiving the scholarship is “fantastic” and shows the support for gender equality in STEM fields.

“It’s great that organisations such as the GCSB are putting their money where their mouth is and making tangible movements toward gender equality.

“With opportunities such as these, I really hope that it encourages young women who are considering STEM fields or need reminders that things are changing and they have support.”