Otago students lend support to those helping others 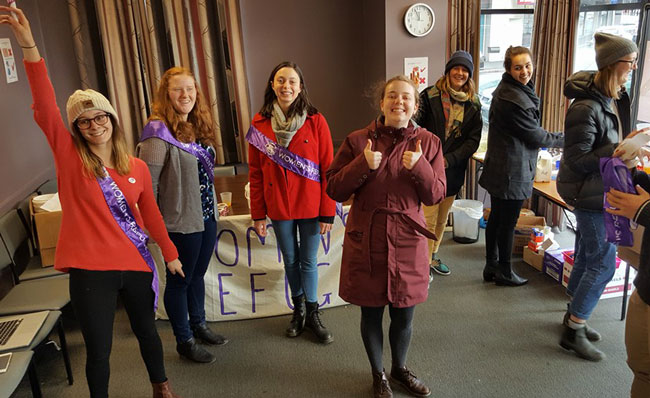 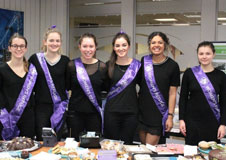 When the call went out last year for student volunteers to help out with an auction in support of Te Whare Pounamu Dunedin Women’s Refuge Appeals Month, Otago Law student Maddi Ingham didn’t hesitate to sign herself up. This year, she took on an even bigger Appeals Month role.

“I took over running the whole month,” says the third-year Law student who, over a week afterward, is still chuffed with the success of this year’s effort which saw around $24,000 raised for Women’s Refuge.

The commemorative event which kicked off the appeal brought supporters together for an evening of reminiscing and speeches. “There were two founding members of the Refuge there who shared stories which showed just how far it has come,” according to Maddi.

The evening was meant to include the release of over 400 candles into the harbour to commemorate the over 4,000 women and children who graduated through the Refuge’s education programmes over the past two decades. However, poor weather meant the release had to be postponed and will now be carried out this spring.

Despite the sombre tone of the commemorative gathering, Maddi says it was a positive start to the appeal.

The bake sale alone raised $1,600, she says, thanks to many generous buyers who happily paid more than the ticketed price for their purchases or bought up whole plates to share with their departments.

For Maddi, the highlight of all of the students’ effort was the “amazing” auction, held at the historic Savoy in Dunedin, which wrapped up the campaign.

“People were getting involved in the bidding, Paul Ego kept it fun, Grant McLean our auctioneer from Ray White is always great and we had huge community support from businesses.”

She recruited dozens of students to help out through Law for Change – a group of law students who use their budding legal skills to help make a difference in their community.

This year, a separate Women’s Refuge Appeals Week Committee was established made up of just under 50 students, most from Law, but also from Commerce and other areas of the University. Many had also volunteered the year prior.

“Women’s Refuge has just a handful of paid employees and relies entirely on volunteers, most of whom are busy helping people,” says Maddi. “They wanted to have less of a focus on fundraising and more on raising awareness, so we stepped in to take on fundraising responsibilities.”

Though she’s volunteered at many events herself, organising a week-long campaign was a new undertaking for Maddi who says it was a struggle to fit everything in at times.

“I love doing Refuge work and would often prioritise it above my assignments and essays,” she admits before hastily adding “my first semester grades didn’t slip, though!

“It was awesome being involved in all the events this year and seeing how they run. I love interacting with the women from the Refuge; they’re always really appreciative and helpful.”

Only 65 per cent of the Refuge’s costs are government funded. The rest is raised through fundraising, events, philanthropic trusts, and bequests. They rely on donations from members of the public, businesses, and other private funders and trusts to offer essential services that help women and children every day.

Wenda Parata-Muir, Tumuaki Manager at Te Whare Pounamu Dunedin Women’s Refuge, says the Otago students’ help has been “instrumental” in enabling the organisation to carry out its commitment to provide services to victims of domestic violence.

“Their energy and unconditional passion drives them with the motivation to bring new initiatives to the table every year. They have this amazing creative flow with so much determination that we feel truly blessed and it is a great honour knowing that they do this for us at Te Whare Pounamu Dunedin Women’s Refuge.”