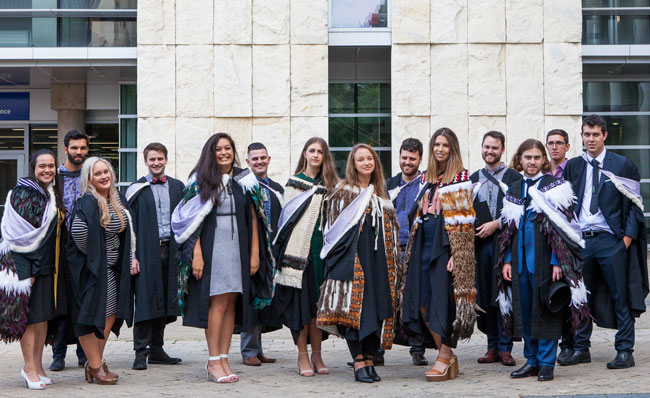 Soon to be doctors attend Māori pre-graduation events on campus ahead of the weekend's landmark graduation ceremony. Photo: Sharron Bennett.

The largest number of Māori medical students in New Zealand’s history will graduate from the University of Otago on Saturday 10 December.

Forty five Māori medical students will graduate in what is a significant event for the graduates, their whānau, the University of Otago, iwi Māori and the New Zealand health workforce.

The milestone continues a legacy created by the University of Otago over a century ago, when Te Rangi Hiroa graduated in 1904 as the first Māori doctor to graduate from a New Zealand university.

For the first time at Otago University Māori representation within the total number of medical graduates equates to the proportion of Māori in the New Zealand population.

Professor Peter Crampton, Pro-Vice-Chancellor, Division of Health Sciences and Dean, University of Otago Medical School said New Zealand’s medical workforce is on the verge of some rapid and very exciting changes in both the number and proportion of Māori doctors.

“The graduation this year from the Otago Medical School of 45 new Māori doctors marks a significant inflection point – we expect at least this number of Māori doctors to graduate each year from now on,” Professor Crampton said.

“My hope and expectation is that within the next decade it will be normal for New Zealanders, when they enter the health system, to be treated by a Māori doctor. I would like to thank and congratulate our Māori leaders, staff and students for their hard work and dedication in making this possible.”

Associate Dean Māori Joanne Baxter says achieving a representative proportion of Māori in the health graduation total is only part of the story.

“These young Māori doctors will join increased numbers also graduating from Auckland University; together these doctors will grow the Māori medical workforce by almost twenty percent.”

“This is a big change; these graduates and the ones that follow will join growing numbers of Māori who are making a difference for Māori health. The presence of these young Māori doctors will be felt by whānau, hospitals and communities and among the medical profession as they take up roles across the country.”

“Not only that, there are other important consequences for the graduate’s communities; these graduates are already providing inspiration for young people who aspire to take up similar educational pathways,” Associate Professor Baxter added.

The milestone reflected the commitment and hard work of students and the support of their whānau. It also reflects a collaborative effort between the University and the Ministry of Health, co-ordinated by the University’s Māori Health Workforce Development Unit and Māori Centre, to support Māori health students throughout their University studies.

The Unit developed Te Whakapuāwai in 2011 - a wrap-around programme of academic, pastoral and cultural care for Māori students enrolled in Health Sciences First Year, to foster academic excellence, create a supportive whānau environment, and build a culture of peer support. The range of support initiatives were tailored to suit the individual needs of each Māori student and their strengths.

Te Whakapuāwai was built on key learnings from the University’s Tū Kahika scholarship programme that supports up to 20 Māori students through Foundation Year to begin tertiary studies.

“The threshold to enter the Otago Medical School has not changed, we have simply put a system of support around Māori students that has allowed them to persevere through first year health science studies, and progressed and sustained them over their five years of medical and other health profession training,” Associate Professor Baxter said.

This graduation is part of a much bigger strategy for Maori health workforce development at Otago, with the Division of Health Sciences working towards a representative sociodemographic profile of students across all nine of its health professional programmes.

Natasha Martin, one of the medical students who will be graduating on December 10 said the support over the last five years has been invaluable.

"To join the growing workforce of Māori Doctors is a humbling privilege through which I too hope to contribute to the wellbeing of my whānau, hapū and iwi," she said.

University of Otago staff, Government representatives, key stakeholders, the medical graduates and their whānau will attend a function at the University after the graduation to recognise the achievement.