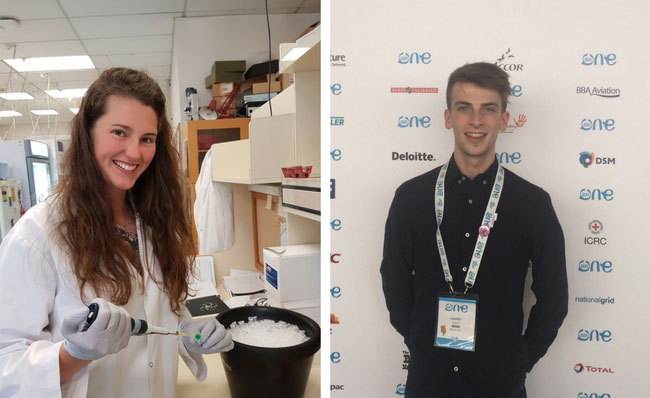 Bridget Thomas and Harry Flett are co-recipients of the 2017 Prince of Wales Prize.

The outstanding academic achievements of two students have been recognised by the University of Otago.

Bridget Thomas and Harry Flett are co-recipients of the 2017 Prince of Wales Prize.

The A+ average students received the University’s premier undergraduate award, valued at $500, in recognition of not only their academic ability, but extra-curricular interests as well.

The Prize, established in 1988 by the University of Otago Graduates’ Association to commemorate its golden jubilee year and to honour its patron, His Royal Highness the Prince of Wales, is given annually to the top student, or students, completing an undergraduate or honours degree across all divisions.

Bridget feels "honoured and grateful" to receive the 2017 Prince of Wales Prize.

She always wanted to study science at university, but was not sure in what area.

Originally from Christchurch, she chose to study at the University of Otago because of its strong reputation, particularly in science, and Dunedin’s vibe.

“It’s pretty relaxed, easy to get out and about, and good student life,” she says.

"It’s pretty relaxed, easy to get out and about, and good student life."

After taking a plant biology paper in first year, Bridget found it fascinating and was hooked, going on to study biochmemistry and plant biotechnology.

“I chose to do plant biotechnology as I’m interested in issues such as food security and sustainability and could see how some of the tools and approaches from plant biotechnology could be used to improve crop production to try to meet growing demand for food but with fewer inputs.

“I chose to do biochemistry alongside it as I wanted to learn more about how things work on a molecular level, and about the molecular techniques and tools available,” she says.

Her interest in plants has extended outside of the University. During her time in Dunedin she has become a committee member of the Botanical Society of Otago and a volunteer with the Orokonui Living Legends, where she is helping to restore the Orokonui estuary.

Bridget is also an accomplished tennis player, with recent successes including winning the Otago Women’s Shield in doubles and being selected to represent Otago Tennis in a Senior Teams event.

She is a keen traveller and adventurer, spending the last New Zealand summer in Arctic Finland as a dog sledding guide, taking care of up to 200 dogs at a time.

She plans to take a break in her education for more travel this year.

Harry felt a "mixture of disbelief and pride’’ upon receiving the award.

"I'm incredibly thankful to any members of staff that nominated me and that have helped support me throughout my time here at Otago,” he says.

Also originally from Christchurch, he was ready to “try something different” for his tertiary education.

"I'm incredibly thankful to any members of staff that nominated me and that have helped support me throughout my time here at Otago..."

"After visiting many of the universities around New Zealand, I couldn't pass up the opportunity to study at Otago.

"You have to admit there's an atmosphere here. The location, the people, the energy, I don't know what it is, but it sold me,’’ he says.

Harry has always enjoyed numbers and working with people, so commerce and business was a natural study choice for him.

"As I've progressed through my degree, I've only become surer that it was the right choice for me,’’ he says.

While studying business, Harry also runs his own – AceTutor Dunedin – a student-run tutoring company which has helped more than 1500 students over the past two years, as well as making significant donations to Dunedin community organisations.

Outside of business, Harry is a skilled musician, sharing his talent as a tutor and for charity events. He was also selected by CA ANZ as its New Zealand delegate to the One Young World Summit in Colombia last year.

Harry completed his Bachelor of Commerce last year and will study towards a Master of Finance this year.