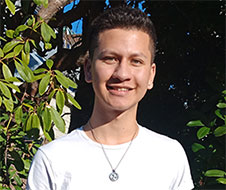 Cameron Young always ticked the New Zealand European box on forms, but since finding his roots at the University of Otago he is proud to tick the Pacific Islander box.

Cameron, of Hastings, was raised by his mum with five siblings. He says she always wanted the best for him and his siblings, so she instilled good traits and encouraged them to work hard. He was head boy at Karamu High School and on the Hastings Youth Council.
“This is the first time I’m away from home and it’s a big journey for me.”

However, Cameron always felt disconnected from his Cook Island heritage.

Growing up, he didn’t have much interaction with his Pasifika side because his mother did not see Pacific Islanders as having successful careers, Cameron says.

“In her eyes, success meant being white, being a pakeha.”

So throughout his youth it was easier for Cameron to connect with his pakeha side, his fairer skin and eye colour helped him to pass as European.

“After a while I was just able to cover up that part of my identity. I was leading a half-life. That’s half of who I am.”

As a single mother raising six children, Cameron’s mother had to sacrifice a lot for her children, he says.

“That’s why I’ve wanted to work so hard – to not only represent the Pasifika students in my country, but also to show my mum that as a Pacific Island woman, she is extremely successful, and that she did a great job of raising us children.”

“After a while I was just able to cover up that part of my identity. I was leading a half-life. That’s half of who I am.”

Despite the disconnect, Cameron was happy to get involved with the programme and, in turn, “get in touch with his roots”.

“I definitely feel so much prouder to be a Pasifika student.”

He credits the Summer School programme as “crucial” in helping him to accept all of who he is. As a result, he’s loving being more involved in the community and has even started to get his siblings more involved too.

Programme co-ordinator Ala Teu has been a big part of Cameron’s journey, he says.

“Not only was she a fantastic leader within the programme, but she has taken the role of my mentor outside of the programme as well.”

As President of Arana College Cameron is also involved in fostering the community there – with celebrations for Pacific Island language weeks and other important events.

Through studying health science Cameron is hoping to be accepted into the medicine programme at the University. He says there is only a small number of Pacific Islanders working in the health sciences and he hopes to be a part of a growing representation.

As for mum, Cameron says she’s come around too – and he’s showing her that you can be both successful and a Pacific Islander.

“I think I showed that we can get involved and that we are a part of their whānau.”