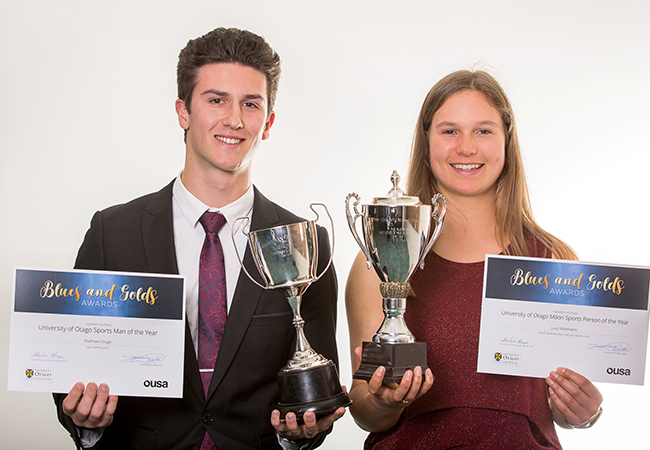 The achievements of Otago’s sporting, cultural and community best were celebrated with the University of Otago and OUSA Blues and Golds Awards in October.

Vice-Chancellor Professor Harlene Hayne told the recipients their admirable commitment to success in extracurricular activity was an investment in their futures.

“Large-scale longitudinal research has now clearly shown that one of the best predictors of success following graduation is participation in high level extracurricular activity.”

During the ceremony more than forty students, coaches, clubs and societies were acknowledged for their achievements and contributions to both the University and the wider community.

Matthew Clough – University of Otago Sports Man of the Year
Matthew is an accomplished multisport athlete. He is the current world champion from the ITU World Cross Triathlon Under-20 Championship, which was held in Spain in May. Among his many sporting achievements he has also placed first in the Under-25 Men at the Xterra Motatapu, and qualified for the Xterra World Championships in Hawaii, where he placed ninth in 2018. He placed third in the Under-25 Men at Xterra Rotorua this year, as well as third in the Under-20 Men at the New Zealand Cross Triathlon Championships.

Megan-Li Smith – University of Otago Sports Woman of the Year
Megan-Li is the current junior under 47kg powerlifting champion after winning the gold at the World Classic Powerlifting Championships in Sweden. She won gold in her squat, bronze in her bench press and gold in her deadlift, taking an overall gold and making her one of seven New Zealanders to ever win gold at the world championships. Megan also broke the world junior deadlift record after lifting 147kg.

Lucy Aitken and Annie Grimes – Outstanding Member of the Dunedin Community
Lucy and Annie were the leaders of a team of student volunteers who tirelessly raised money for the support of family violence during the Te Whare Pounamu Dunedin Women’s Refuge annual appeal month. They arranged street day appeals, bake sales, fashion sales, a charity auction, a quiz, music gigs and a sponsored gym initiative. The appeal raised over NZD$32,000. The pair demonstrated dedication, leadership, energy and enthusiasm in their efforts.

Hannah Morgan – Outstanding Member of the University Community
Hannah is dedicated to raising awareness around mental health. Hannah runs a solo mental health and wellbeing campaign, called Swim Strait for Life, which aims to bring awareness to the importance of building and maintaining positive wellbeing in the University community and in the wider New Zealand society. She swam the Foveaux Strait on the 12 February this year to fundraise for the New Zealand Mental Health Foundation and the Otago University Students’ Association. She raised more than NZD$30,000. Since her swim she continues to work with OUSA and student-led mental health initiative Silverline to bring awareness to the importance of positive wellbeing in New Zealand.

Otago Students’ Spear Fishing and Hunting Club – OUSA Sports Club of the Year
The Otago Students’ Spear Fishing and Hunting Club has grown dramatically over the past few years, successfully running events for its members and the wider community. Some of their events include barbecues and potlucks, club dives, beach clean-ups, and a large fundraiser – The Great Otago Charitable Fish Auction, which raised more than NZD$3,000 for the Otago Rescue Helicopter and the Wildlife Hospital.
They competed in a number of events such as the South Island Spear Fishing Championships, where two members placed second. The club pride themselves in gear hire and safely tour guiding members in Dunedin’s finest diving spots.

Muslim Students’ Association – OUSA Society of the Year
This year the Muslim Students’ Association have showcased a strong community. The Association continues to provide successful events for University students. These include the Campus Vigil, Dunedin Vigil, Hijab Day, Relay for Life, Mosque Open Day, Eid Celebrations, Marae visits, interfaith quiz nights and Ramadhan trivia and challenges. The Association’s executive committee have shown great leadership, not only to their members, but to the University and wider Dunedin communities.

Indian Students’ Association – OUSA Cultural Society of the Year
The Indian Students’ Association have been great leaders within the University community this year. The Association fundraised for the Christchurch Attacks by volunteering within the Dunedin Muslim Community to provide care packages and volunteering with Muslim students from Dunedin high schools. It also donated their profits from its annual cultural showcase. The Association gained sponsorship and donations of non-perishable food for the Al Huda Mosque. It was involved in the International Food Festival, hosted the Holi Festival of Colours and a number of other International Committee Events.

Outstanding Member of the Dunedin Community

Outstanding Member of the Dunedin Community

University of Otago Māori Sports Person of the Year

University of Otago Sports Man of the Year

University of Otago Sports Woman of the Year

University of Otago Coach of the Year

OUSA Sports Club of the Year

OUSA Society of the Year

OUSA Cultural Society of the Year