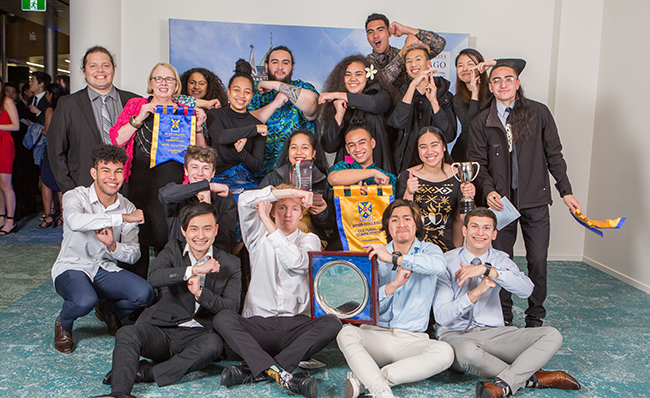 Toroa College won the cultural section of the Inter-College Competition. 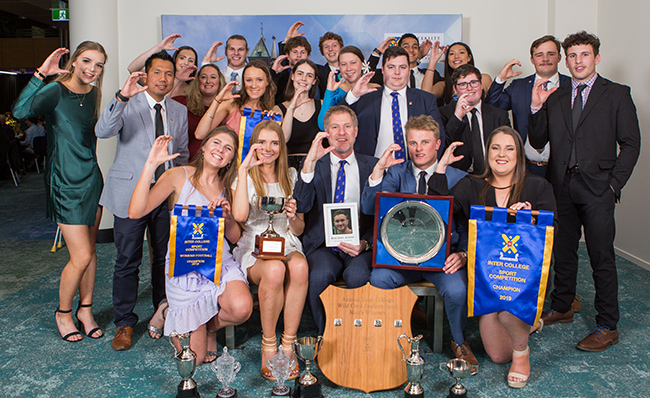 Cumberland College won the sporting section of the Inter-College Competition. 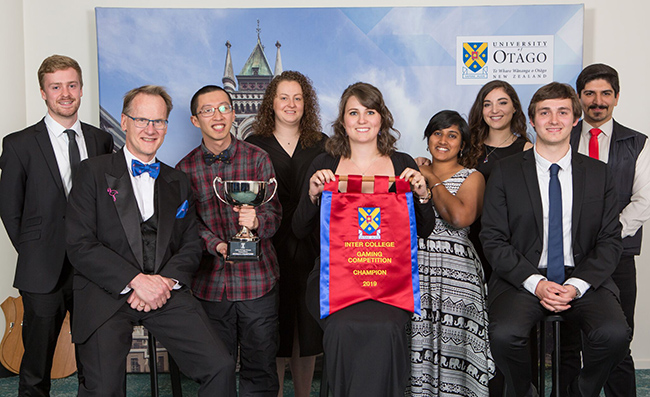 Abbey College won the gaming section of the Inter-College Competition.

Three residential colleges are ecstatic to be the winners of the 2019 Inter-College Competition.

The colleges were celebrated at an Inter-College Awards Night in September.

Cumberland Head of College Nick Bates says his College is stoked about the victory, especially because it was a repeat of last year’s win.

“The participation across the College was fantastic, and our participation points increased from 2018 so that’s a sign that the vast majority of the residents are involved. This also goes for the Games and Cultural competitions.”

“Sport and Cultural are both a focus for us as a college. It just so happens that we attract a very sporty cohort of residents.

It was a big team effort from Cumberland and Mr Bates gave much of the credit to his staff, namely Resident Tutor Kirsten Humphreys, Senior Tutor Jenna Lockhart and Senior Residential Assistant Luke Dawson.

The best part of the competition is not the winning, it is whanaugatanga (kinship), Mr Bates says.

Just because Abbey College is home to postgraduate students rather than a cohort of first year students does not mean they are not enthusiastic to participate in the Inter-College Competition.

Head of College Chris Addington says despite being the smallest college (75 residents) the crew had enthusiastically and vigorously taken part in all areas of the competition.

“Of course we don’t have the numbers to field rugby teams but in the smaller team events and competitions we ‘punch above our weight’.”

Games are a big part of Abbey College culture, whether it be traditional games such as chess, Scrabble and card games, or more modern games such as Settlers of Catan.

Promoting participating in all inter-collegiate events is an important part of the management of Abbey. Mr Addington says he finds college members respond in kind when they see others taking part and having fun.

This year Abbey practiced and planned for the puzzle-making competition. This was evident when they broke the one-hour barrier for working a 500-piece jigsaw puzzle. They also practiced for the Scrabble and chess competitions.

“To say that Abbey was excited is an understatement. They are enormously proud of this result.”

Mr Addington also thanked the “good people at UniPol” who did an outstanding job organising the Inter-Collegiate Competition this year.

“It is a massive task and they do it with style and administrative excellence.”

Another smaller college took out the top spot at the competition, with Toroa College winning the cultural banner.

Head of College Christina Watson-Mills and Toroa alumni Albert Fairbrother say everyone at the college is “delighted, ecstatic, pleased” and “stoked” to have won the Inter-College Cultural Competition.

“Winning confirmed to us that we have achieved the community and culture we aimed to realise within the 2019 Toroa community. The demographics within our community coupled with the different cultural competitions that ran throughout the year allowed everyone to have a chance to participate and be a part of something bigger than themselves.

“Winning the competition wasn't the objective we had for 2019, winning was the reward for the passion and effort we have in our in 2019 community.”

Culture is an integral cog in the Toroa wheel. Student participation the cultural events was high.

Mrs Watson-Mills says they don’t look to make numbers but rather offer residents the chance to take part and feel a sense of belonging to the College.

“We think that without culture there is no identity and vice versa. We have a multi-cultural group of residents, injecting a beautiful tapestry of diversity and culture into the Toroa community. We want people to feel connected while they are here because there is an importance to a sense of identity and a sense of place. And that is how our culture develops.”