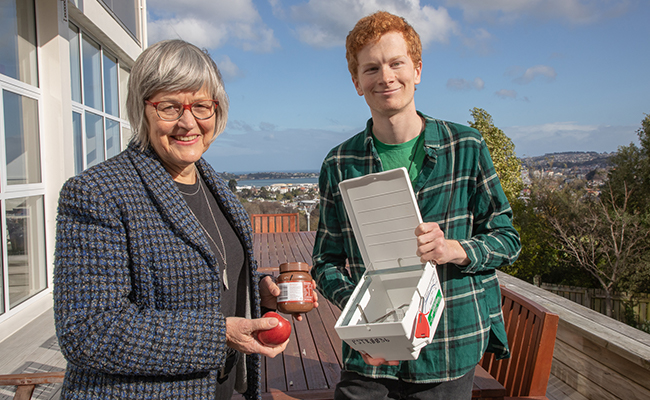 Hearing raucous possums at night and coming face-to-face with them in the bush between Aquinas College buildings has led to students volunteering to trap the pest, with City Sanctuary.

Aquinas is the first college to join City Sanctuary with the aim of protecting birds, their food and their eggs while also helping to stop the possums spreading tuberculosis.

Student Oscar Thomas says there are a lot of native birds around the University of Otago college in Gladstone Road, including “kereru, bell birds, tui, … it would be nice to give them a chance”.

He thought trapping the possums would also be a good contribution towards earning a Kōwhai Award through the University of Otago Green Your Scene programme, which supports staff and students to help make the University a more sustainable place. The Kōwhai Award is the highest in the programme.

The rest of the college’s Green Your Scene student team was keen, so Oscar contacted City Sanctuary which gave the students chew cards to nail to tees in the area. The non-toxic lure inside attracts possums and they chew on the cards, leaving their unique bite marks behind.

Those cards confirmed the students’ suspicions, the college had a possum proliferation. The students received five traps a few weeks ago from City Sanctuary and were shown how to monitor and use them, including how to ensure they only caught possums, Oscar says.

The students suspected the apple and Nutella combination in each trap would lure a possum on the first night and it did. Since then, the traps have caught three more. 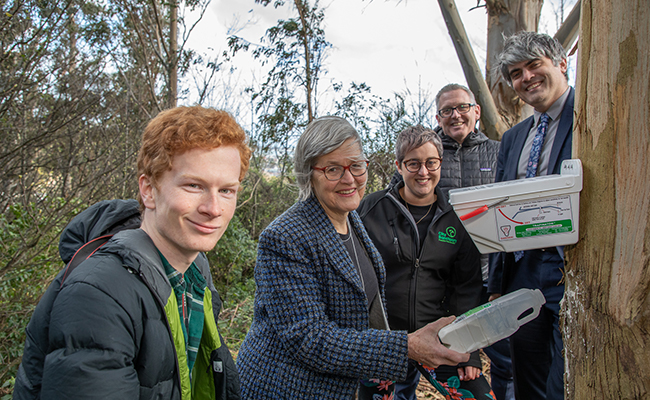 College Head Luke Morrison has committed to having students look after the traps for at least a year.

Oscar says through being involved in other trapping programmes in the Auckland area, he has seen first-hand the destruction possums can wreak on forests. He has seen them eat birds’ eggs, and has seen the benefits of removing possums from areas they do not belong.

He hopes other colleges will get involved in trapping as well.

His college is not only in Dalmore, one of City Sanctuary’s priority suburbs, but also backs onto Dalmore Reserve, a priority reserve with a local community preparing to start its own predator control work.

University of Otago Sustainability Office Head Ray O’Brien says: “It’s fantastic to see our Green Your Scene programme encouraging students to contribute to action that will leave Dunedin a better place long after they have graduated”.

City Sanctuary Operations Supervisor Catherine Hosted says this is an excellent example of communities working together to achieve a common goal.

If you are in a priority suburb and want to get involved, she would love to hear from you. Because City Sanctuary is one of three Predator Free Dunedin projects working towards a goal of a predator-free Dunedin by 2050, other options are available as well.