Ones to Watch: Gisela Kristono 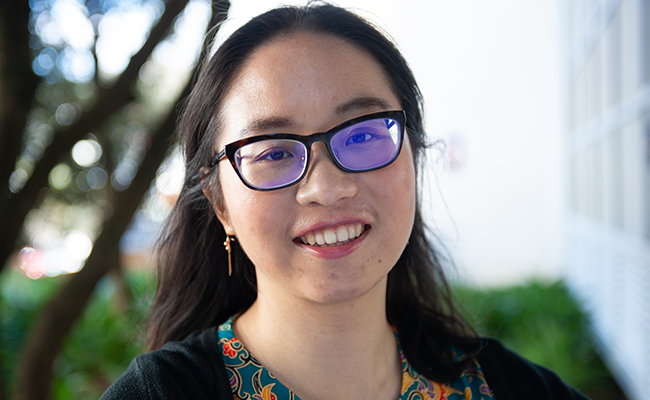 Gisela Kristono is in her fifth year of Bachelor of Medicine and Bachelor of Surgery, as well as in the final stage of her Medicine PhD.

Even before she came to Otago Gisela Kristono always knew she wanted to help people.

Gisela, who is in her fifth year of Bachelor of Medicine and Bachelor of Surgery and final stage of her Medicine PhD at the University of Otago, Wellington, has already had three papers accepted into medical journals and also serves as the Editor-in-Chief of the New Zealand Medical Student Journal.

Born in Indonesia and raised in Wellington, Gisela has always had an interest in science, but her time at Otago amplified her interest – leading her towards a career in cardiology.

“Cardiology was one of my favourite modules in early learning in Medicine (ELM) and that’s why I chose to do my BMedSc(Hons) (Bachelor of Medical Science) project in cardiology. I became more interested in cardiology while I was doing my research project – spending a bit of time in the cath lab was really cool and I enjoyed learning more about the field through my research and at conferences.”

Gisela joined the Wellington Cardiovascular Research Group (WCRG), led by Associate Professor Peter Larsen, as a research student, after returning to Wellington to continue her studies.

She ended up choosing a project which Associate Professor Larsen offered her, looking at inflammatory markers in patients with acute coronary syndromes (ACS), more commonly known as a heart attack, and seeing how well they could predict long-term adverse outcomes. Associate Professor Larsen acts as her main supervisor on the project, with Dr Ana Holley and Dr Scott Harding as her secondary supervisors.

Studying medicine is already an intense path, but Gisela also decided to do her doctoral studies alongside.

When Associate Professor Larsen first brought up the idea of converting her BMedSc(Hons) into a PhD, her initial reaction was no.

“Doing a PhD would mean I’d be in university for eight years, it’d be hard, and I’d be taking a break from medical school for two years, which would make me forget most of the knowledge I’d learnt in ELM.”

However, as the year progressed, she learnt more about the benefits of having a PhD.

After speaking to members of the WCRG, other MBChB-PhD students, and Dr Cindy Towns and Dr Ayesha Verrall, she decided to go ahead with her intercalated MBChB-PhD because she was enjoying her research project, was in a good research group with great supervisors and it would save her at least two years at university. She also realised that doing a PhD in cardiology would likely be useful for her future career aspirations.

Gisela’s first paper to be published was a retrospective cohort study looking at white blood cell subtypes, a group of inflammatory markers that are already commonly tested in the clinical setting, in patients with ACS. Unfortunately it was found that those markers could not predict adverse outcome. It was published in Coronary Artery Disease.

“I’ve really enjoyed my experience on the NZMSJ – each year we have an awesome team of like-minded medical students from both Auckland and Otago who are passionate about research.”

Her second article was published in Heliyon and reviewed literature that had investigated inflammatory cytokines, a different group of markers, and their ability to predict long-term adverse outcomes in patients with ACS. The review found combining multiple cytokines into a predictive score or ratio seemed more promising than individual cytokines alone.

Her third paper was just accepted into Cytokine: X and found that multiple inflammatory cytokines combined into a prognostic score in ACS via a statistical method called principal component analysis, could be used to predict adverse outcomes.

As if her studies and research haven’t kept her busy enough, Gisela has also had three abstracts accepted for Cardiac Society of Australia and New Zealand conferences, of which she presented two in Brisbane and Wellington. Her third presentation is an upcoming conference being held online due to the COVID-19 pandemic.

Gisela’s keen interest in research also led her to become involved in the NZ Medical Student Journal, the only medical student-led organisation in New Zealand for academia and research. She applied to be a reviewer in her second year in 2015 and stayed in that role until 2017.

Through her time with the journal she has learnt many skills, such as how to peer-review, how to proofread articles, and how to work with others long-distance. She has also improved her leadership and communication skills.

“I’ve really enjoyed my experience on the NZMSJ – each year we have an awesome team of like-minded medical students from both Auckland and Otago who are passionate about research.”

“It has also been really rewarding to be involved in publishing professional academic issues with topical themes, such as our issue in April on mental health in Aotearoa and our issue released this month with the theme of social responsibility.”

In her spare time, which she admits she doesn’t have much of, Gisela enjoys doing arts and crafts, playing table tennis and badminton, learning how to cook Indonesian food and watching Marvel movies.