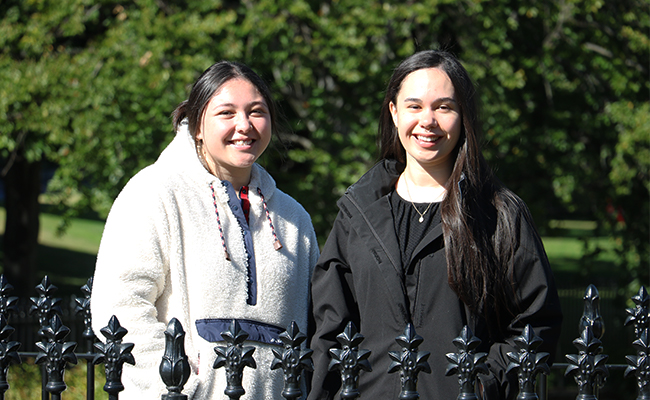 First year students Skyla Anderson-Wynn and Ebony O'Brien are among the students who attended the Pōwhiri at Ōtākou Marae.

Hundreds of tauira (students) Māori turned out for the two Pōwhiri at Ōtākou Marae to kick-start the University’s Orientation Week.

For Skyla Anderson-Wynn (Ngāpuhi) coming down to Otago from Whangārei was about giving herself a challenge to encourage personal development.

“If I was further away from my family I wouldn’t be able to be like ‘mum, can you come get this for me?’ I wanted to be able to develop more on my own as a person.”

“We all spoke in Māori most of the time and it took me about three months to fully understand.

“I loved the learning process. When I was there I realised you don’t have to know everything in the beginning. The journey is just as great.”

“I want to be a family lawyer and help families like mine when I was growing up because I really would have liked to have someone who would understand what it was like for me.

“So being able to relate to the children that I want to be working with is something I want to learn in my journey here.”

Ebony is starting Health Sciences First Year with aspirations of becoming a dentist.

She has moved down to Ōtēpoti (Dunedin) from Rotorua but spent some of her childhood growing up in Rarotonga, where her dad is from.

She grew up surrounded by her Māori culture, from going to the marae, to being surrounded by whānau and attending a predominantly Māori school.

“This is so foreign to me. This is my first time down south so I have no idea what to expect.”

While everything is new she hopes to make the most of the year by making good friends and most importantly doing well in her studies.