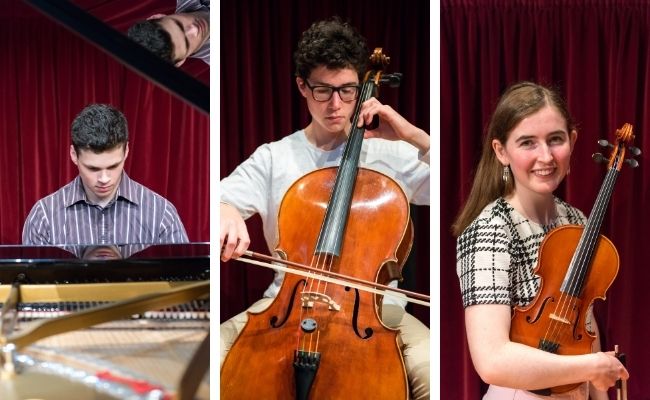 The soloists will share their pieces in a live final performance on 7 May. Their performances will be backed by a collaborative orchestra comprised of the Dunedin Youth Orchestra and Dunedin Symphony Orchestra.

Rose, a Bachelor of Music second-year student, shared her joy at being named a finalist back in March.

“I am really excited to be a finalist. My goal was to have fun and perform a piece I’m proud of. Winning was a bonus. I’ve never played with an orchestra before and it will be a cool experience playing at the Town Hall.”

The students competed with a group of 29 local musicians for the opportunity to play their chosen pieces in the wider orchestral performance next month.

Rose, who has been playing since she was six, is looking forward to getting a taste of playing with an orchestra and gauging where this experience could steer her career in the future.

"I am following lots of different music interests right now to see where it will lead me. I really enjoy performing either in an orchestra, or on my electric violin in a band. I would also love to compose music for film."

”I’m enjoying being at the University. It’s quite cool, Tessa Peterson was my violin teacher for a few years and now she’s my lecturer too.”

Bachelor of Music third-year student, Abhinath Berry, was another of the successful competitors at the event.

"I'm looking forward to performing the Liszt Totentanz with orchestra, as it's one of Liszt's most adventurous compositions. I'm also performing Liszt's other version of this work for solo piano around the New Zealand Wagner Society of New Zealand this year, so it's good to play the original setting too.

Abhinath says he has been performing a lot of Liszt piano music over the last couple of years, but this is the first time he has had the opportunity to play one of his major piano and orchestral pieces – something he is truly proud of.

Alongside the University students is Boudewijn, a Year 13 Otago Boys' High School pupil who is completing second-year cello papers at the School of Performing Arts under the guidance of Senior Lecturer in Performance, Heleen du Plessis. Boudewijn has been playing since he was young child and is excited to be performing with an orchestra.

“I haven’t played in an orchestra since Year 9 so it will be fantastic to play with an orchestra and in the Town Hall which has beautiful acoustics.”

“I’ll be performing Saint-Saëns Cello Concerto No.1. It’s been talked about as one of the best concertos for cello ever written. It’s an exciting piece.”

The three finalists are all friends outside of competing and though the trio will be going head-to-head for the top title, the support is real. The trio have all known each other for years and are excited to share their hard-work with an audience.