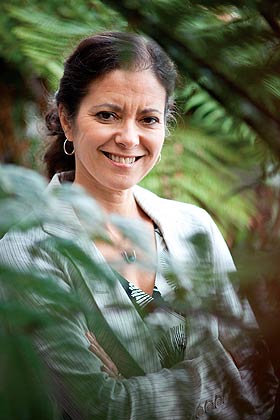 Few stories have captured the imagination of readers as successfully as the extraordinary South Seas tale of Fletcher Christian and fellow mutineers on the HMS Bounty in 1790 and their desperate refuge on one of the most remote islands in the world.

Their actions remained a secret for 18 years, in which time murder, bloodshed and conspiracy left only one mutineer alive in a hybrid community of Anglo-Tahitian offspring on Pitcairn Island.

The story and the characters have become part of Pacific folklore and the fine line between fact and fiction has become blurred in the two centuries since.

For Dr Maria Amoamo, a postdoctoral fellow at Te Tumu, the School of Māori, Pacific and Indigenous Studies, the opportunity to spend a year on Pitcairn while completing her PhD on Māori cultural and indigenous tourism was a unique and life-changing experience.

Her husband, Dr Peter Cardon, was appointed as the island’s sole doctor for a year. Access to Pitcairn is possible only by an arduous five- or six-day journey by air and sea, via Tahiti and Mangareva. Government charter boats visit the island only four or five times a year and there is no air service.

The couple were made very welcome by the islanders and quickly became part of a small, close-knit community. Pitcairners are excellent gardeners and hospitable hosts, sharing food, fish and vegetables until the Dunedin couple was able to establish their own garden.

Far from feeling isolated, Amoamo loved the simple lifestyle. “It’s a very fertile volcanic island with an abundance of all sorts of fruits and you can grow pretty much anything,” she says.

Pitcairn has experienced numerous social upheavals, Amoamo says. All 200 people relocated to Norfolk Island in 1856 because they had outgrown the island’s limited resources. Most remained on Norfolk, but some were so homesick they returned to Pitcairn and many of today’s 52 inhabitants are their descendants.

Amoamo’s postdoctoral research on Pacific island development will examine attributes that are often overlooked as critical strategies for small island nations. Such communities are often perceived negatively for their economic problems, vulnerability and isolation.

“They are very resilient, resourceful, adaptable people and that’s a strong feature of their heritage from when the mutineers and the Tahitian women settled the island in 1790.”

Although some of these problems do exist on Pitcairn, Amoamo says there is a determination to build a self-sustaining community.

“What amazes me is the perspective of Pitcairn people,” she says.

“They are very resilient, resourceful, adaptable people and that’s a strong feature of their heritage from when the mutineers and the Tahitian women settled the island in 1790.”

The island’s economy survived for about 50 years on the sale of postage stamps, but it has now become dependent on British aid. A successful co-operative produces some of the purest honey in the world that is sold to niche markets in the United Kingdom.

There are plans to develop similar markets for coffee and the islanders are renowned for their outstanding handcrafts, weaving, tapa cloth and woodcarving.

The island’s biggest challenge, though, is its ageing population. Many Pitcairn Islanders have moved to New Zealand or Australia and have not returned because of limited opportunities. 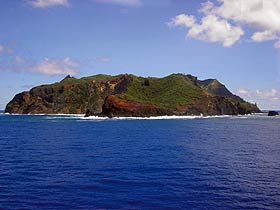 With her practical and academic background in tourism, Amoamo believes tourism offers the islanders their best chance for self-sufficiency. However, despite its historical fascination for tourists, facilities are limited. Homestay accommodation or building small cottages for visitors may be the best way of controlling future development, she says.

Trading with shipping has been pivotal to the island’s survival for two centuries. These days the island attracts six or seven cruise ships each season, a small number of expedition ships and potential to develop yacht charters from Mangareva.

“It is stunningly beautiful. Standing on top of the island, you have a 360-degree view and the expanse of ocean from Pitcairn is incredible. You can see the curvature of the earth, beautiful blue ocean and amazing sunrises every day.”