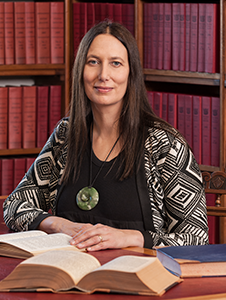 For more than 20 years, Professor Jacinta Ruru has been thinking and writing about how environmental law could recalibrate to be more respectful of Māori rights, interests and responsibilities.

This role as an influential Māori legal scholar has resulted in Professor Ruru being awarded the University of Otago’s top honour – its Distinguished Research Medal.

Professor Ruru says she is “incredibly honoured and moved” to receive the award for 2022.

“It's exciting and significant for the discipline of kaupapa Māori research and the value of mātauranga Māori to be awarded this top honour.

“It is an amazing testament to all those I’ve worked with over the years to develop a research programme in the study of law that makes sense to me and my whānau, to us as Māori. Law has a huge role to play in recreating a more reconciled and well future for us all in Aotearoa New Zealand.”

"“I fundamentally believe that there are incredible solutions within the Māori world, that if we as a country open more of our hearts and minds to this, it would create significant opportunities for us all as a nation."

The Distinguished Research Medal is the most prestigious award the University presents annually. It aims to promote research at Otago and give recognition to the outstanding performance of individual researchers or research teams.

Professor Ruru says law reflects the values of our society, which is why it’s so important that our courts and legislature are becoming more open to enabling Māori laws to sit alongside, and be part of, New Zealand’s formal state legal system.

“I fundamentally believe that there are incredible solutions within the Māori world, that if we as a country open more of our hearts and minds to this, it would create significant opportunities for us all as a nation. The more we can walk alongside mana whenua, and be able to appreciate Māori knowledge, the more opportunities we’ll have as a country.”

Considered a trailblazer, Professor Ruru was the first Māori woman to be recognised as a fellow of the Royal Society Te Apārangi (at the same time as Professor Linda Tuhiwai Smith) and is Aotearoa New Zealand’s first Māori professor of law.

Professor Ruru joined the University’s Faculty of Law in 1999. She has received many significant awards, including the University of Otago Sesquicentennial Distinguished Chair, the Prime Minister’s Supreme Teaching Excellence award and a local Kiwibank hero award. She is also a Member of the New Zealand Order of Merit.

She says a real highlight of her career so far was the opportunity to co-lead the national network of Māori researchers within Ngā Pae o te Māramatanga, which is New Zealand’s Māori Centre of Research Excellence.

Vice-Chancellor Professor David Murdoch says, “Professor Ruru thoroughly deserves this prestigious award. She is a highly distinguished academic whose passionate advocacy for indigenous peoples’ rights and interests has had a major impact on Aotearoa New Zealand society and institutions.”

Professor Ruru is the first Humanities scholar to receive the Distinguished Research Medal in a decade and the first female Humanities recipient since 2003.