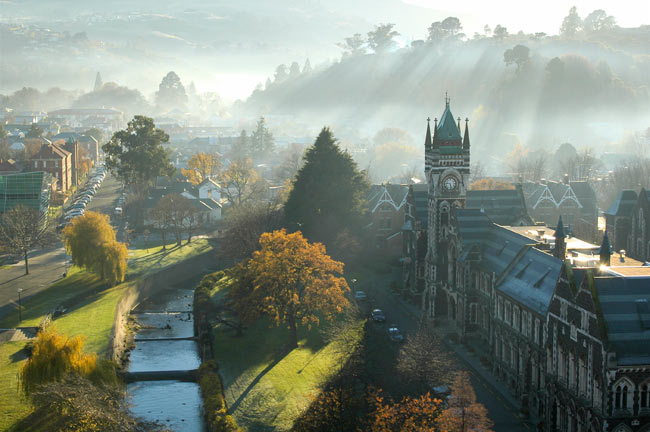 A photo of the University early on a winter morning has won the inaugural Bulletin Board Photo Competition.

The photo, taken by Michael Robertson of the Faculty of Law, beat around 70 entries to take top place.

Second place went to Information Science Administrative Assistant Lu Cox, for a photo of a snow covered field fenced by barbed wire; while Geography PhD student Adrian Nel took third place with a picture of a family living in disputed territory in Uganda.

Professional photographer Sharron Bennett says the judging panel was impressed with the number of entries and the breadth of subjects photographed.

"It was interesting to see what staff are photographing around the world and in their own back yards."

Many images submitted were taken whilst on field work or of the University campus itself. But, she says, the winning image stood out.

"It combined beautiful morning light and great composition to produce a magical image of a familiar location."

Michael Robertson took the photo from the window of his office in the Law Faculty on the 9th floor of the Richardson Building.

"Mist with the sun shining through it like that only happens a few times in the morning each winter, and when I think the conditions might be right I take my camera in with me," he says.

"Photography has been a hobby of mine for many years. I started with film in the early 1970s and was a reluctant convert to digital initially, but now I have been won over completely."

The top 12 images can be viewed below, and will be turned into a 2014 Calendar which will be available for purchase.

It is hoped to make the photo competition an annual event. 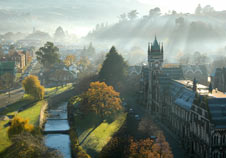 "This photo was taken from the window of my office in the Law Faculty on the 9th floor of the Richardson Building. Mist with the sun shining through it like that only happens a few times in the morning each winter, and when I think the conditions might be right I take my camera in with me.

"Photography has been a hobby of mine for many years. I started with film in the early 1970s and was a reluctant convert to digital initially, but now I have been won over completely." 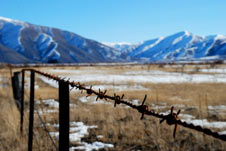 "We were driving through the Mackenzie basin. There had been quite a lot of snow which was beautiful and made for lots of 'stop the car' moments, of which the driver would not stop and I had to photograph out of the moving car window. Luckily for me he did stop a couple of times and I was able to take this one. It is one of my favourites.

"I trained as a photographer whilst living in Australia and worked part-time in both office administration and photography (events, commercial product, portraits). After some extensive travelling I had a lot of travel/landscape type images and so I started selling prints and cards of my photos at markets. Since returning to Dunedin and working full-time at the University I have not been doing much in the way of photography, but it is still something I love, especially the beautiful South Island/Central Otago landscapes and colours."

"This photo was taken of a family living in what has become a disputed territory between what the communities claim is their land and what the Wildlife Authority insists is part of the Mount Elgon National Park. The dispute arose after the authority attempted to 'open the park boundaries' and evict 'encroachers' as they saw it. The communities however organised and re-occupied the disputed land, and there is a current court injunction on activities by both sides.

"I came to photography through the enthusiasm of a fashion photographer friend in London, and while I have also directed my own interests towards people it has been in a different direction. This type of photography for me puts one in a place where simultaneously intimate and distanced relationships are expressed."

Jessica Hinojosa, a PhD student in the Departments of Geology, Marine Science and Chemistry. 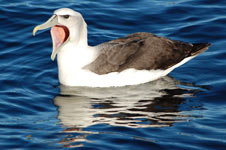 "This picture was taken in Doubtful Sound, Fiordland during April 2012. I was in Fiordland for my PhD fieldwork. We do all of our work collecting sediments and water samples off the University's research boat Polaris II, so I got quite a few shots of mollymawks and albatross like the one I submitted.

I'm one year through my PhD, and my interest in photography usually comes from the time I spend outdoors, which I do quite a bit for both work and leisure. I tend to take photographs of mostly natural settings, and I love when nature or things in nature produce something funny or unique, like in this photo, where I caught a mollymawk mid-yawn or mid-squawk." 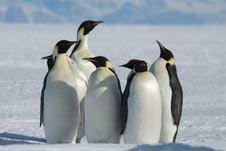 "I do research in the sub-Antarctic Islands and in Antarctica, have always liked photography, particularly underwater photos (I do quite a lot of diving in my research). We had a trip down to Antarctica this last October and visited some seal and penguin breeding colonies, and did research diving under the sea ice.

"We saw these Emperors near Shackleton's hut at Cape Royds - very friendly birds!"

Dr Janice Murray, Senior Lecturer in the Department of Psychology and Associate Dean (Academic) for the Division of Sciences 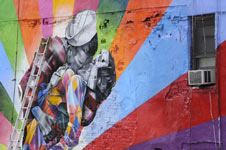 "This photo was shot in 2012 from the High Line in New York. The High Line is a 1-mile New York City linear park built on a 1.45-mile section of the former elevated New York Central Railroad spur called the West Side Line, which runs along the lower west side of Manhattan. You wander between buildings well above ground and get unique bird's eye views of the surrounding neighbourhood.

"In this photo, I liked the narrative suggested by the decrepit window with its dangling cables alongside the vibrant renewal that the mural introduces. We don't know who's behind the window or what they think about the art on their building, and this is an element that I like as well. I'm a keen amateur photographer and I guess drawn to photography mostly by the possibilities of capturing images that are less noticed or are unusual in some way; things that capture the eye and/or tell a story." 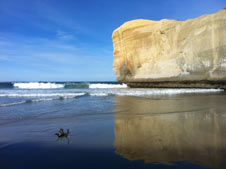 "We had friends visiting from Queenstown and they had never been to Tunnel Beach before. The tide was just right, and created the perfect shot with the waves breaking. It is an awesome spot and one that some Dunedinites do not know exists.

"My wife and I have always been keen on photography and we purchased our first "state of the art" camera last year."

Linda Jenkins, Administrator of the National Monitoring Study of Student Achievement, within the study, within the Educational Assessment Research Unit. 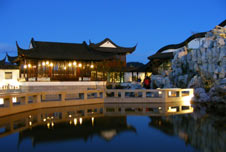 "I came to take this particular photo by taking advantage of the Chinese Garden's late-night open hours. I'd previously been numerous times, but during the day - with 3 energetic children in tow, meaning I couldn't fully appreciate the restful surroundings.

"This peaceful, still image is in stark contrast to my earlier visits. Photography is a form of escapism for me. Looking at a photo I've taken reminds me that I do (occasionally) manage to remove myself from the rigours of daily routine."

"This photo was taken in the tropical forest exhibit at Otago Museum using my sister-in-law's camera. While the butterflies get all the attention, there are many other creatures there. On this particular visit I was fortunate enough to see this little fellow on a feeding dish (I have yet to see one on subsequent visits). It took a couple of shots until I got this one, which was what I was trying to get (tongue in action). I think it was a combination of intent and luck that I managed to get what I was after as I was still learning how to use the camera.

"I have had an interest in photography, but had never pursued it until having children, which lead me to borrow a DSLR from a friend. Subsequently when my sister-in-law bought one, I suddenly had more frequent access to a camera to try things out until finally buying my own camera just recently."

Susan Craig, Executive Assistant to the Dean of the Graduate Research School 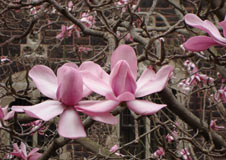 "The magnolia tree in the courtyard behind the Clocktower Building is extremely special to me. My first office in this role looked right out at the tree and every year I await its flowering. It's just so beautiful - quite unique. I love it so much that my husband and I planned our wedding in 2008 to coincide with the flowering of the magnolia in August and had some photos taken under the tree. I've got loads of photos of these flowers and of the blossom around the campus - it's just such a gorgeous environment to work in.

"I'm very much a "holiday snaps" kind of photographer. We travel a lot and I always have the camera at the ready but I have very limited knowledge of how to take a good photo and the shots of the magnolia (taken from a window on the first floor of the Clocktower building) were more about good luck than good management!" 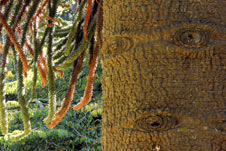 "I went for a walk with my wife and daughter in Chingford Park in North East Valley. It is a beautiful location so I thought taking some photos of my family would be a good idea - and then this tree fellow with the wild haircut appeared.

"I have been a keen photographer since I was 12. I bought my first SLR from saved pocket money when I was 15. Since then I have taken all kinds of photos - objects, portraits, landscape, urban and nature. During the last couple of years my interest focused more on shapes, light, lines, abstract things - the more "arty" kind of photos, but I also enjoying taking casual snapshots." 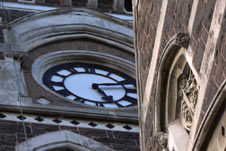 "I am always on the lookout for photographs and I took this from near the Registry front steps, looking up at the clocktower.

"I have had an interest in photography from my school days. As a guide on the Milford Track I had a full page photograph published in the January 1978 edition of the American National Geographic of the Mackay Falls. Robert E. Gilka, the then Director of Photography, his wife and a Senior Editor Carolyn Bennet Patterson and her husband were in New Zealand to write an article on the Milford Track and I just happened to be their guide.

"For the last three years I have been on the Campus Watch team and have built up a substantial portfolio of campus shots as a result. These are generally taken in the quieter times when few staff and students are on site."