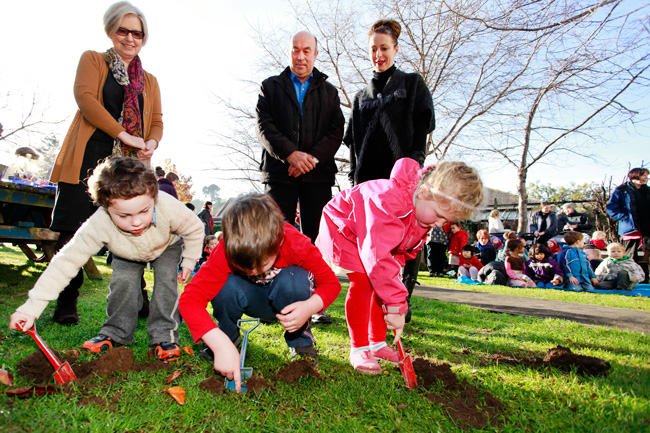 A whakawātea was held yesterday to bless the site of the new Otago University Childcare Association facility, before work begins later this month.

The new state-of-the-art facility will be located in Castle Street opposite Selwyn College. It will offer places for significantly more children than the existing centre in Great King Street, and will include a bilingual centre, landscaped external play space, dining and quiet sleep rooms, as well as non-contact and administration areas.

Property Services Project Manager Christian German says contractors will begin demolition work on site by the end of June, with building set to commence in July.


"The women who worked to achieve the concept of childcare on-campus 40 plus years ago would be as delighted as we are at this next stage in the development of the Association."

All 11 buildings on the both the Castle Street and Montgomery Avenue sides of the project will be demolished, with the exception of the period Edwardian facades of the five villas on Castle Street which will be restored.

“The condition and arrangement of the existing buildings, as well as the need to carry out seismic strengthening, means that re-building is the most cost-effective option,” Mr German explains. “However, by retaining and restoring the villa facades, the view on Castle Street will be improved without changing significantly.”

The facility will provide 140 full-time equivalent (FTE) child places, including 28 nought- to five-year-olds in the bilingual centre.

There will also be two nurseries and two whānau units each catering for 40 two- to five-year-olds.

OUCA Director, Kay Lloyd Jones encourages any interested University staff and students to contact the Association if they wish to add their child’s name to waiting lists for the new facility.

“We plan to maintain our high standard of education and care in environments designed specifically for the Association. The women who worked to achieve the concept of childcare on-campus 40 plus years ago would be as delighted as we are at this next stage in the development of the Association.”

“This is the culmination of years of hard work by a number of our whānau in the community who formed Te Waka Huruhuru Manu ki Ōtepoti Trust in 2004 to start planning for such a centre when our own tamariki were pre-schoolers (they are now 11 and 12 years old). We are grateful for the relationship developed with the University of Otago, and in particular, OUCA, which will mean that this dream will become a reality within the next year.”

Yesterday’s blessing was conducted by Kaumātua Edward Ellison from the Ōtākou rūnaka.

It is hoped that the facility will open on 3 March next year.