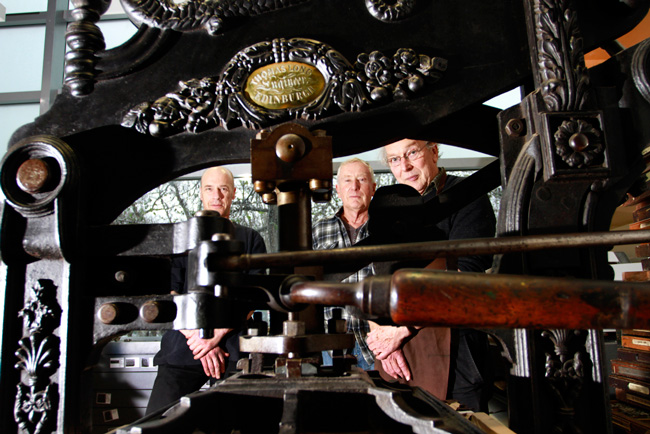 Otago’s Printer in Residence programme is celebrating its 10th year this year – and will celebrate this milestone on Wednesday 17 July with an Open Day.

The programme was created in 2003, by Special Collections Librarian Donald Kerr and the then University Librarian Michael Wooliscroft.

Each year, a printer spends a month or so working the presses in the Central Library’s Otakou Press room – creating a hand-printed book featuring the work of (mostly) New Zealand authors.

The main aims are to produce a book that would not normally be published by mainstream publishers or seen in bookshops, to keep the press technology alive and to be an outreach to all interested parties within the University and wider community.

In 2003, when Dr Kerr arrived, the three printing presses were under-utilised.

“It just seemed like such a great opportunity to start something.”

"It’s really important that we keep printing skills alive. The presses are so much better here, working, than in a museum."

Tara McLeod was the first printer – and 10 years on is here again as one of three printers for 2013. His first residency was so successful that it was agreed that to make the programme an annual one.

Since then, some wonderful hand-printed books have been produced, including works by Brian Turner, Hone Tuwhare, Joanna Paul, Ralph Hotere, Peter Olds, and overseas author Lewis Carroll. Many of these works have been illustrated by artists/print-makers such as Inge Doesburg, Joanna Paul, Kathryn Madill, David Elliot, Marilyn Webb, and Mary McFarlane.

This year’s residency is a collaborative one – with three printers working alongside each other in the Otakou Press room.

When the Otago Bulletin Board visited the printery, the three were hard at work, and enjoying the opportunity to share ideas and problem-solve together.

Both McLeod and Holmes are old hands as Printers in Residence – this year is their fourth time. This is Rob Lamb’s first time, and he is thrilled to have the opportunity to hold what has become a prestigious residency.

“I am really excited to be here,” he says. “I’ve particularly wanted the opportunity to work the Columbian Press. It’s an incredible piece of engineering, and a gentleman’s press.”

The three believe the programme makes a very important contribution, not just in printing and publishing circles, but in showing students and staff of the University and the wider community how printing was done pre-computers.

Holmes says because of the printery’s location in the Central Library students walk past, stop, and chat.

“Yesterday I was laying out copies in the Library and a student came past and said ‘Oh, that’s an Emma Neale poem’.

“It’s really important that we keep printing skills alive. The presses are so much better here, working, than in a museum.”

This week’s Open Day, celebrating 10 years of the Printer in Residence Programme, will be held in the Reading Room at Special Collections. All of the publications printed since 2003 will be on display. You can also see this year’s printers in action.

If you are interested in purchasing one of this year’s folios ($200 each), contact Donald Kerr directly, Email: donald.kerr@otago.ac.nz. Just 100 will be produced so get in quickly.

10 years of Otago’s Printer in Residence: 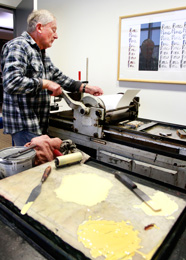 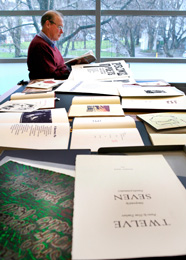 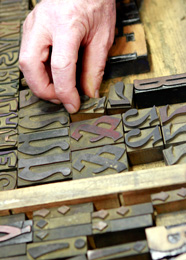