Exhibition interprets the workings of the brain 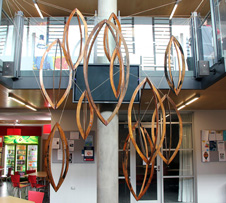 “HOPES” by artist Rowan Holt is one of 17 artworks in a new exhibition Art in Neuroscience being held at the Hunter Centre. The installation interprets the research of Joanna Williams into Alzheimer’s disease.

A new exhibition at the Hunter Centre gives visitors a fascinating and thought-provoking interpretation of the brain and what can go wrong with it.

Art in Neuroscience, a collaboration between the University’s Brain Health Research Centre (BHRC) and the Otago Polytechnic School of Art, opened on Monday.

Seventeen artists worked with 15 neuroscientists to develop art that interprets the researcher’s work.

The exhibition is the brainchild of Anatomy lecturer Dr Ruth Napper. The idea came to her during an etching and printing evening class; her classmates were very interested in her pictures of brain cells and asked her about them and whether that was really what they were like.

“It made me wonder how an artist would view our research, compared to how a scientist views it. Then I wondered about art as a medium for attracting people to science, and to make them think about neurological disease.”

"I personally hope it draws people in who wouldn’t normally be drawn in to science to think about the role of the brain in making us who we are."

Polytechnic Art History Senior Lecturer Peter Stupples was very enthusiastic when she approached him with the idea, and together they planned the project.

“The only direction the artist was given was that the work was not to be ‘illustrative’, but was to be in some way an expression of the research,” Dr Napper says.

One work – “HOPES” by artist Rowan Holt – interprets the research of Joanna Williams into Alzheimer’s disease. Alzheimer’s is a progressive neurodegenerative disorder, in which underlying pathological changes occur in the brain years before the symptoms of memory loss become acknowledged by the individuals afflicted by the disease and their families.

Holt has created a large wooden installation (pictured above) that interprets the effect Alzheimer’s disease has on families - as memories vanish and disappear, the solid frame still exists, suspended in space like rays of hope.

Dr Napper says many of the neuroscientists are “in awe” of what their artists have come up with.

“For the neuroscientists it has been quite liberating in a way to see how someone, who thinks about things so differently, looks at your work. I think it extends your own ability to look at it.

“I personally hope it draws people in who wouldn’t normally be drawn in to science to think about the role of the brain in making us who we are. I think it lets people interact with science and how the brain functions or does not function, by using a different avenue.”

This is the first large exhibition to be held in the Hunter Centre, and Dr Napper says it has proved to be a fantastic venue. Art in Neuroscience will run until Friday 2 August.