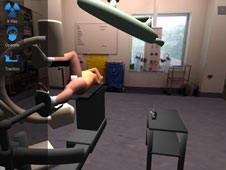 Anyone, from aspiring surgeons to serious gamers, can now use their iPhone to try their hand at surgery using the new Bonedoc app from the University of Otago.

Bonedoc is the brainchild of Dr Phil Blyth, a senior lecturer in eLearning in medicine and a practising emergency medicine doctor. He combined his surgical skills with his coding skills to develop the app in conjunction with Otago Innovation Limited, the University's commercialisation arm.

The app allows the user to step into a virtual operating theatre where they repair a hip fracture. It allows them to realign bones, place a plate and fit screws via an incision, checking their work and getting immediate feedback every step of the way via Bonedoc's x-ray function. Once they have completed the operation their efforts are automatically scored.

Dr Blyth says the inspiration for it started when he was working as an orthopaedic registrar when he would have to learn how to do an operation by first watching and then being guided through the process.

"But a few cases later I would realise that here I am in a lead gown in the middle of the night trying to work out the best way to proceed and thinking why am I learning on this patient? Isn't there a way I can work out what I am doing outside of the operation theatre so that when I am here I know what I am doing and can just do it," he says.

Developing the programming for the app actually helped him work out some surgical issues in terms of drill alignment and other spatial issues.

"A big part of it is seeing all the steps and practising those steps over and over."

Dr Graham Strong from Otago Innovation says the mobile app space is a great way to deliver niche specialised information that might end up having appeal to a wider cross-section of people than you initially expected.

"Phil is unique. Not only is he a fantastic medical professional but he has taught himself to code effectively. Combining that medical expertise with that computer coding expertise has produced this mobile application which is targeted at real world situations. The things you do on the app are things that would happen in a real surgery."

The app has been hooked up to the Apple Game Centre so users can compete for the highest score with friends or even other doctors.

"The power of the Game Centre is not to be underestimated - particularly where the gaming component of the app has a monetary value. So you earn virtual dollars for doing your surgery. As more and more people come onboard that competitive nature will kick in and we will get a lot more players coming back to it."

Although the app has initially been developed for iPhone an Android version is being readied for release in 2014. Other operations are also being developed.

The app is available from bonedoc.org or the Apple AppStore.