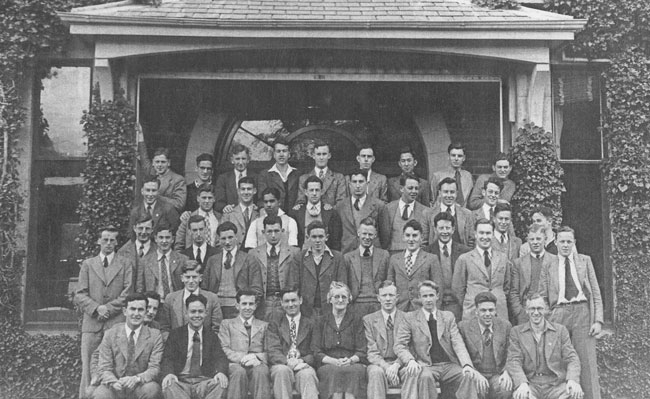 Residents of Arana Hall in 1946. Some of these young men were World War II veterans with a very different worldview than the average high school graduate.

When 1940s residents of Otago’s Arana Hall return for its 70th Anniversary celebrations this weekend, the sounds of renovations to its Colombo and Bates Wings could easily have them reminiscing about their first arrival.

To quote The Urchin, a 1947 Arana magazine: “At the beginning of 1943 the home of the late Sir James Allen was invaded by carpenters and the first student residents almost simultaneously; and to the clatter and bang of hammers, students began their year’s work until eventually the hammering stopped and they found their rooms built around them.”

The 70th Anniversary celebrations will take place on 23 and 24 November. A main dinner for 144, a service at Knox Church, tours of Arana College and Dunedin, official photographs and a memorial tree planting in Arana’s grounds all make for a busy schedule.

Arana College Warden Jamie Gilbertson says, “It will be a chance to celebrate the old stories and some intimate details of the history of the Hall. We have residents from the 1940s and ‘50s coming, some of them were at the centre of the old tales we’ll be telling.”

“It was run on a shoestring,” Mr Gilbertson says. “’Arana’, the Sir James Allen homestead, was the mother ship. The Nissen huts with pinex walls were built around it, a scattered collection of houses accommodated more students, and they came to the house for meals.

“The first students were very robust young men with a wicked sense of humour and a large appetite for playing pranks and jokes on the long-suffering staff – they were irreverent to the Reverends.

“I am glad I wasn’t a warden then, they would have given us a real run for our money. Some had had wartime experience; they’d been overseas fighting. They weren’t going listen to the Reverend when he said they weren’t allowed to drink beer.”

Things have changed since 1943. Arana Hall is now Arana College. Female students have been accommodated at Arana since 1978 and now make up 60% of the residents. Significant expansion of numbers and rooms have seen the roll grow to 400, but Mr Gilbertson says some things have remained the same.

“This college is still laughing – it’s the echoes of laughter from those original rascals. We are still scallywags. We have a history of high academic achievement and tremendous fun.” 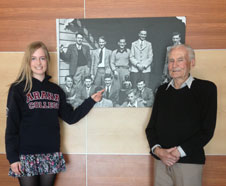 2013 Arana College resident Courtney Franks and her grandfather Noel Titheridge with a photograph of Arana Hall’s ‘Mellor House Boys’ (thought to have been taken in 1947). Ms Franks points out the youthful Mr Titheridge.

Enter Arana College through its Clyde Street main entrance and you’ll see a photo taken around 1947 of a group of young men on the front porch of Arana’s Mellor House (Mellor House now houses Department of Psychology staff).

Mr Gilbertson says, “The Mellor House Boys picture was brought in by the widow of one of our past residents. We fell in love with it, enlarged it and waited. Sure enough, after a few years, people started walking in and saying, ‘that’s my father’ or ‘that’s granddad, I didn’t know he came here!’. It has been an emotional experience for some.

“One mum brought her daughter here as a first-year resident only to find her father on the wall – she was crying to see her dad there.

“Three weeks ago a 1947-48 Mellor House resident Noel Titheridge saw himself in the photo when he came to visit his granddaughter, Courtney Franks, who had just completed her first year here.

“There is a soul in this place and that’s it – Courtney and Noel. We’re here looking after these young people, making them safe in the modern world, but having these connections with Arana’s history helps us understand our future direction – it guides us.”

Walk through the front door of the original ‘Arana’ homestead and glance at the door to your right, then look immediately to your left and imagine the door that used to be there. It once led to the quarters of Arana Hall’s first long-suffering Factor Eric Low (furnace man, gardener, handyman, and later, acting treasurer). Now read from 1947 Arana magazine The Urchin to learn something of what poor Mr Low had to put up with…

“Eric lived in what is now the common room, and to that hideout he retreated whenever the situation appeared to be out of control. In fact, upon one occasion it was only the timely arrival of the Matron returning late in the evening which enabled the Factor to emerge for his nightly ablutions without being terrorised by those terrible boys.

“And there was the occasion when a rope was tied between his door handle and the present dining-room door handle – a room occupied by Tubby Dignan. This rope had just the required degree of slack in it. At a given signal that much used warden baiter, the sewing machine, was pushed violently up and down the front hall. Eric’s door opened and out popped Eric’s head and shoulders to determine (cautiously, mind you!) the cause of the disturbance.

“This was Tubby’s cue. He opened his door vigorously (and how!), the rope tightened, and Eric was firmly held between his door and the jamb – while Tubby solicitously asks the nature of his plight, the solution of which was a perplexing problem and took a considerable time to solve…”