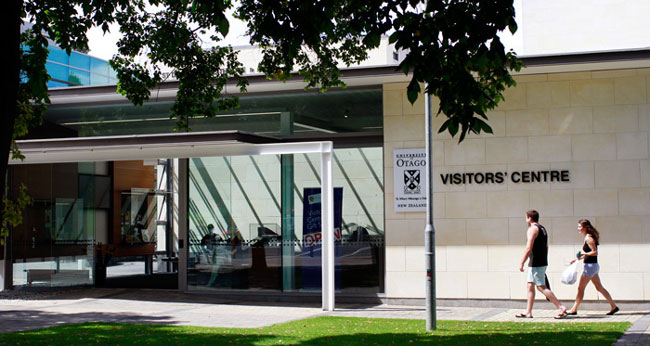 Otago’s first official Visitors’ Centre recently opened its doors and if the foot traffic of its first few weeks is any indication, it’s a wonder the University functioned without it for so long.

Visitor Centre Supervisor Michael Hodge says that he and the rest of the staff at the new Centre have seen over 2700 people through since the Centre opened its doors last month.

“Feedback from visitors has been very positive. We’ve had more than one say that such an outlet is long overdue,” Mr Hodge says.

Located at the St David St entrance to the Dunedin campus – a location chosen because of its centrality on campus and easy access from the State highway – the Visitors’ Centre serves the dual purpose of providing a welcoming first stop for tourists and visitors, as well as a shop from which they and students can buy a range of quality Otago-branded memorabilia and other merchandise.

"It is a very positive addition for the University and for the wider community."

The Centre also features interactive and audio-visual displays of information about the University and uploadable, commentated campus tour guides for smart phones. It also serves as the new meeting place for parents and would-be students who have pre-arranged guided tours of the campus.

Director of Student Services and Project Convenor David Richardson says the project was originally conceived in line with the University’s strategic goals to ensure outstanding campus environments and student experience, and also to provide greater community access to and use of the campus.

“It is a very positive addition for the University and for the wider community,” Mr Richardson says.

Early estimates see the Centre hitting the mark with staff, students and particularly with tourists.

“It is worth noting that as of today, nearly two thirds of the visitors to the Centre have been tourists and a quarter are students. It will be interesting to see how these patterns evolve over the first year,” Mr Richardson says.

The Visitors’ Centre is open seven days a week from 9am to 4.30pm.

An official opening event is being planned for late March. Details will be made available closer to that time.

The new Centre stocks an array of Otago-branded products.