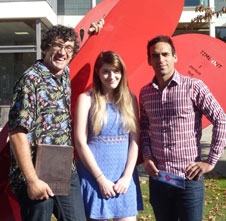 “First and foremost, it would be great for the city to foster and support new writers and readers, and recognise and promote the city's creativity and New Zealand literature internationally,” says Dr Waite.

“It will also attract students to the city, provide international exposure and exchange opportunities for existing strengths in Humanities and Performing Arts, as well as Science Communication and the wealth of libraries and creative residencies supported by the University.”

In addition to Dr Waite, who was one member of the project’s four-person Steering Committee, the University was also represented with several members on the project’s 12-person Advisory Board.

The Divisions of Science and Humanities also provided Summer Scholarships to Design & Applied Sciences students Eleanor Parker and Mikey Moeahu to assist with the research for the bid.

Among other things, the pair put their research skills and knowledge of local heritage and sustainable urban design to use in compiling an audit of the city’s ‘creative assets’ – a substantial and required element of the bid.

For Ms Parker, the project was an opportunity to learn more about Dunedin.

“The project allowed for me to get to know even more about my adopted home than I would have thought possible,” says Ms Parker.

“It was an excellent way to end my time at Otago. The opportunity to continue working alongside the staff and keep learning from them was very valuable to me.”

Mr Moeahu says he is excited by what the future holds not just for literature in Dunedin, but for the wider creative community as well.

“For me it is pretty special being a local to have been able to contribute to Dunedin’s bid, for, if successful, it has an everlasting positive footprint for the future generations of Dunedin.”

The hard work behind them, the bid team will now have to wait until November to hear outcome of the bid.