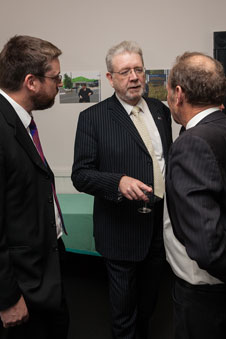 Michael Russell (centre), the Secretary for Education in the Scottish Government, talks with Professors Liam McIlvanney (left) and Tom Brooking at the CISS. Photo: Clive Copeman.

The Secretary for Education in the Scottish Government, Michael Russell, visited Dunedin earlier this week. After a full slate of engagements throughout the city, Mr Russell’s visit culminated in a trio of events organised by Otago’s Centre for Irish and Scottish Studies (CISS).

For Professor Liam McIlvanney, Associate Director of the CISS, the opportunity to host the international politician was a “rare privilege”.

“Mr Russell’s visit to CISS speaks to the renewed interest of the Scottish Government in connecting with the Scottish diaspora, and confirms the Centre’s position at the forefront of Irish and Scottish Studies in Australasia.”

During his visit, Mr Russell spent time at the CISS attending an informal reception with Centre staff, associates and postgraduate students.

Following his visit to the CISS, Mr Russell gave a public lecture to a crowd of over 100 people on ‘Scotland’s Choice: the Referendum on Independence’ which was delivered as part of an ongoing series of events the CISS is hosting in the run-up to Scotland’s independence referendum.

“As a senior cabinet minister and close confidant of Scotland’s First Minister Alex Salmond, Michael Russell is right at the heart of the debate over Scotland’s future,” says Professor McIlvanney.

“To have someone of his authority address us so close to the referendum itself gave us a real insight into the Scottish Government’s thinking at this momentous juncture in the nation’s affairs.”

Immediately following his public lecture, Mr Russell headed to the University Book Shop where he spoke at the launch of a new Otago University Press book, Unpacking the Kists: The Scots in New Zealand. Two of the book’s authors – Brad Patterson and Tom Brooking – are attached to the CISS.

The book launch brought a fittingly festive end to what was a red-letter day for the CISS.