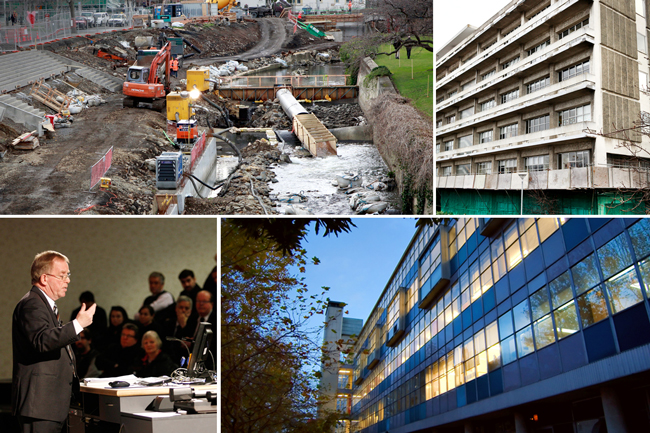 The University of Otago Council has approved a list of building developments with an approximate value of $650 million that will further cement the University as a leading force in teaching, learning and research within New Zealand.

The list and information about the projects was presented to a full St David Lecture Theatre at the Vice-Chancellor Professor Harlene Hayne’s Staff Forum today.

In a presentation to staff at the forum, the University’s Chief Operating Officer John Patrick revealed details of the projects listed on the University’s Priority Development Plan which will be evaluated for construction progressively over the next 15 years. The University Council approved the plan in principle at its last meeting in June.

The plan includes the following projects (in order of priority):

• A new Dental School for New Zealand to replace ageing facilities. This recognises the importance of Otago’s Dental School as the only tertiary training facility for dentists in New Zealand.
• A major renovation in the Science Precinct involving significant redevelopment of the multi-storeyed Science 1 and II buildings on the west side of the Dunedin campus. This includes the construction of new teaching and research laboratories.
• A major upgrade of research project facilities mainly for Health Sciences in Dunedin.
• The construction of teaching, learning and research space at the Portobello aquarium as a medium term replacement for space lost due to the closure of an earthquake-prone building at that facility.
• A new Arts Building, replacing the older multi-storey concrete building in Albany Street. The aim is to develop a more coordinated and functional Humanities Precinct. Related to this is the replacement of the Property Services building in Albany Street to free the site for the Humanities Precinct.
• A new Biomedical Research building, concentrating research that is currently spread throughout the Dunedin campus in the one development in the south campus area – which is south of the Museum Reserve where medical school facilities are mostly concentrated.
• A new Marine Science teaching facility and aquarium, preferably in the harbour basin area.
• A new Music facility, including a new Centre of Performing Arts, to be developed in the east precinct near the existing music studio in Albany Street east.
• New facilities and additional space for the Department of Botany.
• A new research facility in the Christchurch Health Precinct for the University of Otago Christchurch. The timing of this project is dependent on the development timeline of that precinct.
• The redevelopment of the former Unipol building in Anzac Avenue.
• A new student and academic services hub to be built in the area of the Union Lawn, in the heart of the Dunedin campus. The plan is to concentrate services and provide an opportunity for student-related retail development and social spaces in this important area.
• A number of landscaping projects are detailed on the Plan. These include the landscaping of Castle Street, from Dundas Street to St David Street, the landscaping of Castle Walk on the west side of the Leith opposite the Clocktower and also Union Street from the Staff Club to University College, including renovation of the Union Street footbridge and the immediate area to the north of the Clocktower building.

A number of health and safety projects are also included on the Plan. These have a high priority and include the following.

• Improvements to access and safety in the Commerce Building, including a new entrance directly into the atrium, removal of the existing external stairs, new internal stairs providing access from the atrium and replacement of the atrium roof.
• The completion of the refurbishment of the University of Otago, Wellington, facilities, and some further seismic strengthening.
• A continuation of the seismic strengthening work and improvements to fire safety resulting from building seismic assessments completed over the last two years.

The Plan also includes reference to a number of major maintenance projects, such as refurbishment of buildings in the historic precinct, including the Clocktower.

“The intention of the Priority Development Plan is to show the University community, the public, and contractors, what we will be looking at, and focussing on, over the medium term when it comes to our built environments,” Professor Hayne says.

"We want to improve what is already a first-class experience for students, for teachers and for researchers and we want the campus to be enjoyed by the communities in which we live."

“We want to improve what is already a first-class experience for students, for teachers and for researchers and we want the campus to be enjoyed by the communities in which we live.

“Many of these projects were signalled in the Campus Master Plan released in 2010. This was a strategic and guiding vision of how the University should be developed in coming decades across all its three campuses and this plan follows the guiding principles in that strategic document,” she says.

Professor Hayne says the Council agreed to the priority development plan and projects within it “in principle”. However, the plan is a living document and other projects may yet be added, or removed, as situations and needs change.

Mr Patrick says the estimated cost of the projects in the plan came to $649.9 million. This figure includes projects that have already been approved or are under construction, such as the redevelopment of St David II for the Department of Applied Science, new space for Food Science in the Gregory Building and the University’s share of the costs of the enhancement of the Clocktower precinct as part of the Leith Flood Protection Scheme.

“While we do have cost estimates for each project on the Plan, we do not intend to disclose these because some projects have not been sufficiently defined and the costs are commercially sensitive.”

Mr Patrick adds that the Priority Development Plan has been prepared with the intention that it is funded without resorting to large-scale borrowing.

“Currently the University does not use debt to fund capital projects, but looking ahead, may want to do this,” Mr Patrick says.

“Funding decisions will be made as we progress planning for these projects,” he says.