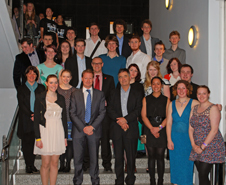 Perhaps it’s a case of home-ground advantage, but members of the Otago University Debating Society (OUDS) recently achieved unprecedented levels of success both as competitors and as hosts of the Australasian Intervarsity Debating Championships (Australs).

“Kieran’s achievement is just fantastic and this is the first time in living memory that an Otago team has reached the quarter-final at Australs.”

Hosting the international event – the second largest university-level debating competition in the world – was a year-long undertaking for the organising committee led by Co-Convenors, John Brinsley-Pirie and Sophia Frentz, as well as General Manager, Leon Stirk-Wang.

“Enormous effort went into the tournament’s organisation. Just one glitch can wreak havoc with the entire schedule. Otago Australs was a rare tournament in that basically everything went to plan and there were no major delays,” Paul says.

OUDS is Otago’s oldest society (began in 1878) and established the Otago University Students Association (OUSA) along with the University Rugby Club in 1890. It is supported by Gallaway Cook Allan Lawyers, the Vice-Chancellor and the Faculty of Law.