Printer in Residence hard at work 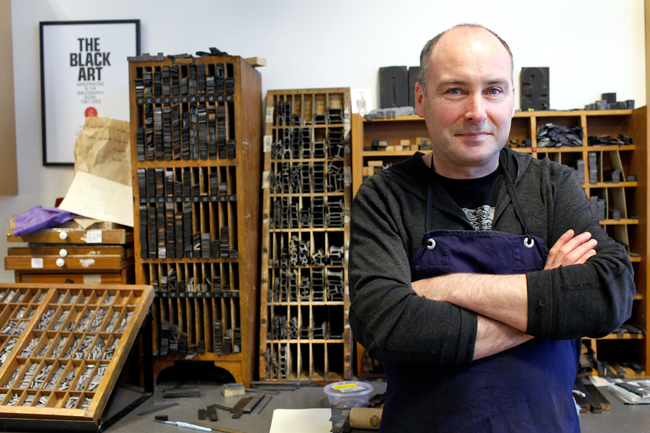 The University’s Otakou Press Room is once again in use as this year’s Printer in Residence Peter Vangioni gets to work on the Columbian ‘Eagle’ Press.

Mr Vangioni, owner-operator of Christchurch’s Kowhai Press and a curator at Christchurch Art Gallery, is spending August immortalising the words and lyrics of Michael Morley.

"I guess one thing that I really appreciate is ... to be able to focus on the project rather than work away at nights during my spare time which is the usually the case in Christchurch."

He is hand-printing XXXXXwords, a book of lyrics and linocuts by Morley, a Port Chalmers artist and musician. The book will include nine lyrics spanning Morley’s career in music/sound art from the 1980s through to this year. He will also produce a limited edition print from one of the blocks.

“I have long been a fan of Michael's art practice especially his work as a sound artist and I think the quality of his lyrics warrant being published in book form so I pitched the idea to Donald Kerr, who was keen,” Mr Vangioni explains.

Morley’s bands include The Dead C and Wreck Small Speakers on Expensive Stereos. The lyrics will be illustrated by five linocuts which have been specially produced by Morley for the project.

For Mr Vangioni, a “self-taught” printer, the opportunity to take up Otago’s Printing Residency is incredible.

“I guess one thing that I really appreciate is having the opportunity to collaborate on a project with one of Dunedin’s most interesting artists, as well as to be able to commit to printing a book full-time for a month, to be able to focus on the project rather than work away at nights during my spare time which is the usually the case in Christchurch.”

"There's a real sense of all the other printers who have used it. The wooden handle has a patina from all the use over the years."

Mr Vangioni has long held an interest in printmaking through his work as a curator at the Christchurch Art Gallery, and has curated exhibitions of Ralph Hotere's lithographs, Jason Greig's monoprints and 20th century British prints.

“But it was my interest in hand printed books that got me delving into the world of letterpress printing. I am self-taught but was very fortunate to be 'shown the ropes' so to speak by the printers at Ferrymead Printing Society in Christchurch.”

He is using the University’s Columbian Press – dubbed the Eagle for the characteristic eagle counterweight on the top lever. It is one of only seven of these presses in New Zealand and the only model which is in use.

“It was a little daunting at first but after using it for a few days you get to know its particular ins and outs. There's a real sense of all the other printers who have used it. The wooden handle has a patina from all the use over the years.”

Otago’s Printer in Residence programme was established in 2003, and last year celebrated its 10th anniversary. It was created to encourage an awareness of the print facilities in the library and to foster book-making both within the University and in the wider arts community.

It has seen collaborations between many print makers and Otago writers, artists and now musicians.

“There's now quite a legacy of Otakou Press publications,” Mr Vangioni says - a legacy he is thrilled to be joining.

Want to buy a copy?