Clements named Peacemaker of the Year 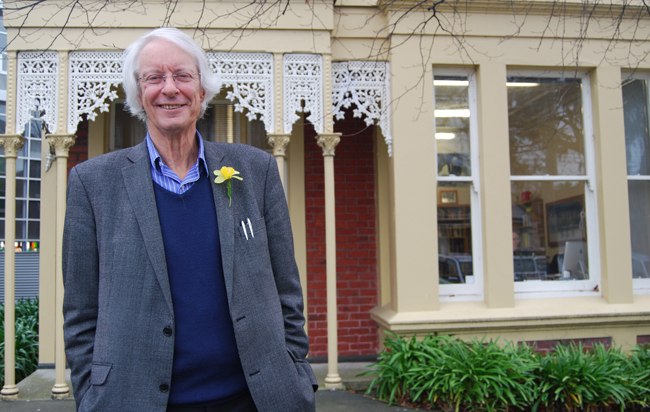 Otago’s Professor Kevin Clements, Director of the National Centre for Peace and Conflict Studies, has been honoured with the New Zealand Peace Foundation’s 2014 Peacemaker Award – an award his own father helped create more than 40 years ago.

It was particularly special for Professor Clements as his own father, the Rev Leslie Clements, helped develop the awards when he was Director of the Foundation in the 1970s and 1980s.

The Rev Clements was the first Director of the Foundation, and was a conscientious objector in the Second World War.

"When I accepted the prize I acknowledged my father, John Male, Kath Knight and all the early supporters of the Foundation."

“When I accepted the prize I acknowledged my father, John Male, Kath Knight and all the early supporters of the Foundation. They believed that violence and war are learned behaviours and because of this they were passionately devoted to the development of peace and conflict education programmes at all levels of the education system.”

The New Zealand Peace Foundation was established in 1975 to expand peace education throughout New Zealand. It has developed highly innovative programmes for both primary and secondary schools aimed at stopping bullying and developing peer mediation and problem solving. It also maintains very close links with a wide range of peace think-tanks and research institutes around the world.

Professor Clements says he hopes Otago’s own College of Education, in collaboration with the Centre for Peace and Conflict Studies and the Peace Foundation, can work to mainstream peace education in primary, secondary and tertiary institutions.

“This will guarantee that New Zealand will continue to be a largely peaceful country capable of resolving all of our identity and other problems amicably and non violently.”