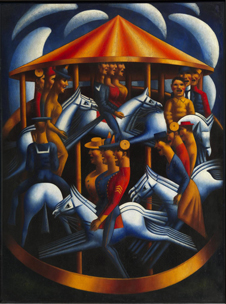 ‘Merry-Go-Round’ by Mark Gertler is one of 10 artworks chosen by Wellington campus researchers that convey war-related health impacts.

Centennial events around the world have heightened public interest in the First World War. For health professionals and students in particular, that interest provides an opportunity to reflect on the health impacts of war. Some of the University’s Wellington campus researchers have chosen art as one medium to do so, distilling numerous artworks relating to the First Word War down to 10 that collectively convey the broadest range of war-related health impacts.

Sourced through the vast collection of works in Google Cultural Institute’s Art Project, the selected artworks range from portrayals of men in devastated and mud-covered landscape or amidst devastating attack, and wounded men being treated, through to portrayals of war refugees and a metaphorical merry-go-round.

Lead author Associate Professor Nick Wilson says the thought-provoking and disturbing selection could be used in teaching about the impacts of war and the need to invest more societal resource in preventing war.

He notes that while such art captures the experiences of those who endured the war in a way that the written word cannot, there are many health impacts not covered in these or other artworks. This includes infectious diseases endured by soldiers such as pandemic influenza and malaria, nutritional diseases such as scurvy, and various mental health impacts such as post-traumatic stress disorder.

"The lived reality of war becomes so much more vivid when we see the artistic expressions it has inspired..."

“Many of these impacts extended far in to the future. There was also suffering endured by widows and children without parents, not to mention the gender imbalance from a shortage of men for some age groups in the post-war period and this effect on the lives of women.”

Nevertheless, the selection is an important starting point for capturing some of the themes around the physical and psychosocial impacts of the First World War, he says.

“The lived reality of war becomes so much more vivid when we see the artistic expressions it has inspired, and these 10 expressions are an excellent source for opening up discussion and exploring the massive health impacts that are portrayed, but also widening that into discussion about the wider and longer-term impacts that aren’t necessarily captured in the images.”

The 10 artworks as per the article published in the journal Medicine, Conflict & Survival are:

‘Over the Top’ by John Nash

'The Destruction of the Turkish Transport in the Gorge of the Wadi Fara, Palestine’ by Sydney W. Carline

‘An Advanced Dressing Station in France 1918’ by Henry Tonks