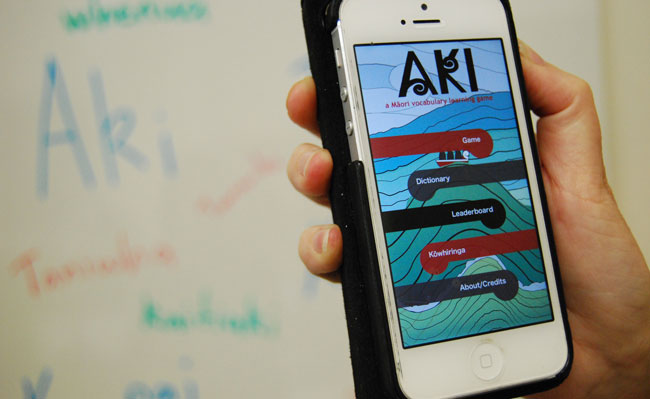 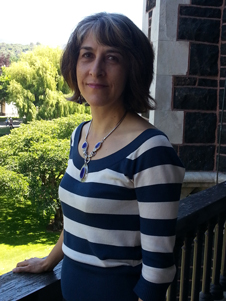 A University of Otago research project to find out how Dunedin families pass on Māori to their children has led to the development of an innovative new Māori Language App, called Aki.

Aki is a free Māori language vocabulary and phrase-learning app for iPhones and iPads that involves participants in an interactive game. Its aim is to develop Māori language skills, particularly in young people, with fewer in this age group speaking te reo, according to the most recent Census figures.

One of the developers, Otago’s Dr Katharina Ruckstuhl, says the project is the culmination of research started in 2010 involving herself, and fellow academics the late Dr Tamar Murachver of Psychology and Associate Professor Poia Rewi at Te Tumu, the School of Māori and Indigenous Studies at Otago.

“We were looking at how families in Dunedin passed on Māori language to their children.

“One of the things that we noticed was that, when we gave them visual vocabulary learning posters, they used them enthusiastically for a while and then they stopped ‘seeing’ them. They became too familiar and merged into the background.

“We thought that we would use a different medium – an app – as many of the families said that their children enjoyed using games.”

With the technical help of Grant Baxter, who is an iOS App developer from AppLab Ltd and Professional Practice Fellow with the University’s Department of Applied Science, along with third-year Design for Technology students, including aspiring game designer Sam Gregory, the researchers devised a game on Aki (to teach) App where participants need to paddle a waka and escape the taniwha (monster) by learning and identifying Māori words and phrases.

"...making mistakes is an important part of learning. With an app, no one will be looking over your shoulder to see whether you are correct or not."

“Finish one level, then start the next level with a whole new set of words. Once you’ve completed all four levels, play them again and challenge yourself to complete the levels in the quickest time possible with the fewest mistakes. You can also challenge your friends and family to play and compare their progress and accomplishments,” Dr Ruckstuhl says.

New ways to learn Māori are needed to halt the decline in numbers of people who can speak in Māori about everyday things. The decline was picked up during the last Census in 2013. There were 125,352 Māori (21.3 percent) who could hold a conversation about a lot of everyday things in te reo Māori - a 4.8 percent decrease from the previous Census in 2006.

“We know that younger generations are enthusiastic players of online games so it made sense to try to develop something that is aimed at this target group. Because language app development is still in its infancy in New Zealand, there are few Māori language vocabulary learning apps that have an interactive component. We think interactivity is key,” Dr Ruckstuhl says.

She says it will be different to other methods of learning Māori because it can be played “anywhere at any time”.

“So you don’t need to be in a classroom, or near a computer, or taking a Māori language course.

“One of the things we know is that making mistakes is an important part of learning. With an app, no one will be looking over your shoulder to see whether you are correct or not. We are trying to encourage people to play, make mistakes, and learn.”

The App will be free through the Apple Store, and work is under way to also make it available to Android phones.

The App development project was funded by Nga Pae O Te Maramatanga Māori Centre of Research Excellence, which is hosted by the University of Auckland. The Tertiary Education Commission funds this CoRE.

Honours students in Te Tumu, Nikita Hall and Kelly-Ann Tahitahi, also worked on the project, specifically with whanau in Dunedin in ascertaining language domains in the home.