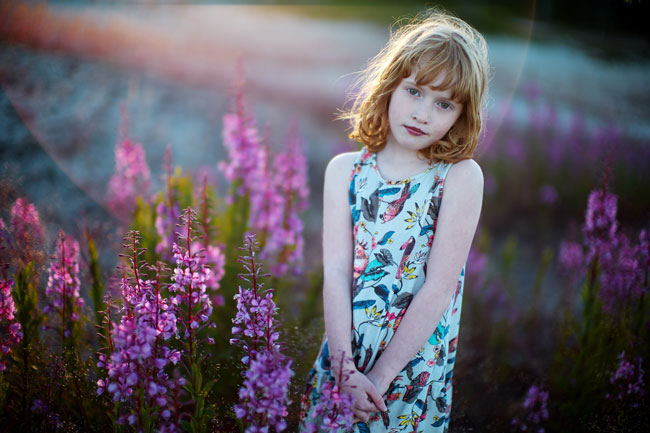 The winning photo in this year’s Bulletin Board Photo Competition takes advantage of Sweden’s long summer evenings to create an extraordinary and evocative portrait image.

Markus Dagnell, a postdoctoral researcher working at the Christchurch Campus’ Centre for Free Radical Research, took the photo of his daughter late on a summer evening near the family’s summer cottage in Sörfjärden on Sweden’s east coast.

It was selected from nearly 200 images to take the top spot in the third annual competition. Second place went to Amber Hannah, a lab technician at the University’s Hercus Taieri Resource Unit (HTRU) for a photo of her dog Sika on a kayak. Htin Lin Aung, a postdoctoral fellow in the Department of Microbiology and Immunology took third place with “Monks doing their chores”.

This year we made a specific request for more “people shots” and one of the competition’s judges, professional photographer Sharron Bennett, says it was great to see a variety of subjects being photographed, including many entries featuring people.

“The top three images all used colour and composition to stand out as winning photographs,” she says. “These photos grabbed our attention and kept our eyes focused within the image.”

Guest Judge David Xie, who runs the Humans of Otago Facebook site says it was wonderful to see so many high quality photos entered this year.

“Thanks to everyone who contributed. I was honoured to have been part of the judging team.”

The top 12 images can be viewed below, and will be turned into a digital calendar which will be released month by month beginning in January 2016. 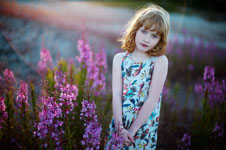 “This photo of my daughter was taken in Sweden on a late summer evening at Sörfjärden where we have our summer cottage. During this time of year in the northern part of Scandinavia the sun doesn´t set until after midnight, making the evening rays magical.

“Photography has been a huge hobby for me the last 10 years. I most enjoy photographing people and I like doing portraits and reportage such as weddings. Not surprisingly my three children are my most frequent photo objects.” 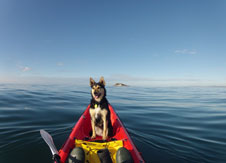 "My husband and I were out kayak fishing for blue cod off the coast of St Clair with our dog Sika who loves coming out in the kayaks with us. It was one of those perfectly calm days, the water like silk, and Sika was just chilling out at the front of the kayak. This photo was captured with a gopro.

"Most of the photos I take are with my Samsung Galaxy S4. I mostly take pictures of my family but also of random things that I find appealing as I encounter them!"

"I took this photo when I visited Bagan - an ancient city in Myanmar (Burma). I was walking along the Irrawaddy River and encountered a group of monks doing laundry. I wanted to show the other side of the daily life of monks, as people usually think monks spend their time only on religious matters.

"I love travelling and love to capture moments and record them forever. This is where my interest in photography started."

Tulipa Briggs, Administrator and Finance Assistant at Uniprint, ITS

"‘Frosted’ is a photo taken in the Winter Garden at the Botanic Gardens in Dunedin. I spent the day round the gardens specifically looking for shots to enter in a nature section of a local photo competition. My first thoughts were to try and capture the subject from a different viewpoint and angle and create an image within an image. By using an extreme close-up and cropping it to eliminate most of the plant, this created the effect of ice or snow settled in a dense valley.

"I enjoy taking photographs and like the challenge of trying to create some mystery as to what the subject is - looking at everyday objects and seeing them in a different perspective. I joined the Dunedin Camera Club eight years ago and found my interest in photography and image editing has grown. I have used a variety of camera gear over the years from DSLR to Mirrorless and even ‘the iPhone’." 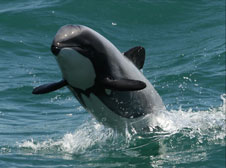 "This photo was taken during a routine water sampling trip outside Otago Harbour and stood out for me because the dolphin was coming straight towards me, rather than side on as they normally appear in pictures. When you see the underside of a Hectors Dolphin like this, they always look so well dressed. This particular dolphin jumped over 30 times consecutively, perhaps just enjoying a sunny day.

"I have been involved in wildlife photography for over 10 years, working mainly as a skipper aboard Monarch on the Otago Harbour, trying to photograph rarer wildlife in poses that people don’t normally see. For me photography is just a hobby with occasional financial benefits, but I am always trying to take that photo that will be suitable for entry into the BBC Wildlife Photographer of the Year competition." 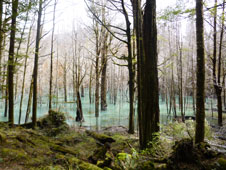 "This photo is of a magical spot on the Dart Valley, where the landscape has undergone massive changes over the last few years. A number of large slips changed the course of the Dart River, flooding huge sections of forest and forming the lake shown in the picture. The bright blue of the water is due to the river being fed by the Dart Glacier, which lies further up the valley. I was doing my field work counting birds on the Dart when I came across this amazing section of the track. It was so beautiful that I could not stop taking photos. Needless to say I did not get many counts done that day.

"I have no training in photography and have a wee Panasonic point and shoot that accompanies me on my adventures. For me, taking photos is about capturing special moments that I can share with others, especially my mum. She's my biggest (and probably my only) fan!" 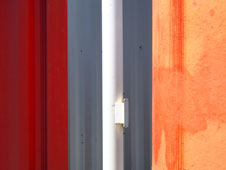 "This photo was taken recently in Wellington on the waterfront. It consists of parts of two shipping containers, and the base of a small crane, together with a pole. I like it because it is the kind of image that required a photographic “eye” to see. The four elements were all at different distances from me, so I had to know that in two dimensions rather than three they would all be reduced to flat bands of colour in the same plane, and I had to know that I could use the camera like scissors to cut out all elements that detracted from the design I wanted."

"I have been interested in photography since the 1970s, though given the time I have been doing it I should be more technically proficient than I am!" 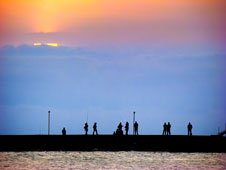 "I took the photo in Anzali Harbour on the Caspian Sea. My family and I went to the north of Iran for vacation during summer holiday. We went out for a walk by the beach. I really liked the sunset and decided to record that moment.

"Photography is one of my hobbies and I try to find a space for my camera in my backpack." 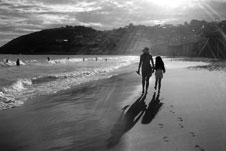 "I took this photo on an unusually hot Christmas day, walking with my family on St Clair beach. I had forgotten my usual bulky DSLR and only had my phone with me. I quickly pulled it out and snapped away, thinking the pictures would not be very clear. However I was pleasantly surprised - never underestimate a small camera and your instincts. Later, I converted the photo to black and white to create a more dramatic effect.

"I’ve been interested in photography since high school when a friend encouraged me to help with the yearbook. Later in life, I enrolled in a few photography courses. These have increased my interest and improved my skills. Nowadays I enjoy snapping family life, landscapes and College events." 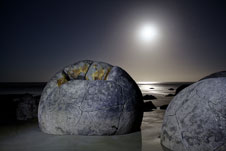 "After seeing some impressive night photos of the boulders, I wanted to try capturing something similar. The moon was in the wrong place to light the boulders from this angle, so I used an LED torch to illuminate the foreground. This unexpectedly revealed blue and gold hues that aren't so noticeable in daylight, and which I hadn't seen in other photos.

"I got my first DSLR camera just over a year ago. I like experimenting with different types of photography, but am most enjoying long-exposure landscape photography." 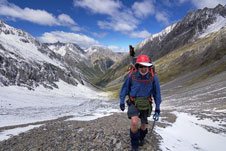 "This photo was taken during a recent Otago Tramping and Mountaineering Club long weekend trip. We were well beyond any tracks and heading towards a crossing from South Temple into Ahuriri. I am reasonably fit so I like to walk ahead and then take photos as others are catching up. I really liked the colours, textures, and angles in this spot. I stopped and started taking photos with 11-16 mm lens to emphasise the vastness of the space, waiting for Philip to walk in to fill the frame.

"I used to take black and white photos as a kid, processing my films and prints in the bathroom. I re-kindled this hobby about 12 years ago with a digital camera. Eventually I upgraded to DSLR and merged it with my passion for tramping." 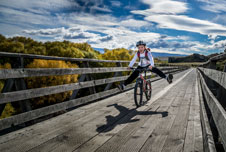 "This photo was taken on the Otago Rail Trail last year when cycling with friends. I set my camera to manually focus on a spot of the bridge and asked everyone to cycle through as hard as they could. The little girl (Sophie) without prompting threw her legs out as she came through, stealing the show from the rest of her family.

"I bought a DSLR almost two years ago and have been slightly obsessed with photography ever since. I tend to move from hobby to hobby, but photography still has me firmly hooked. Joining the Dunedin Photographic Society last year has helped me hugely to learn and will hopefully continue to do so."