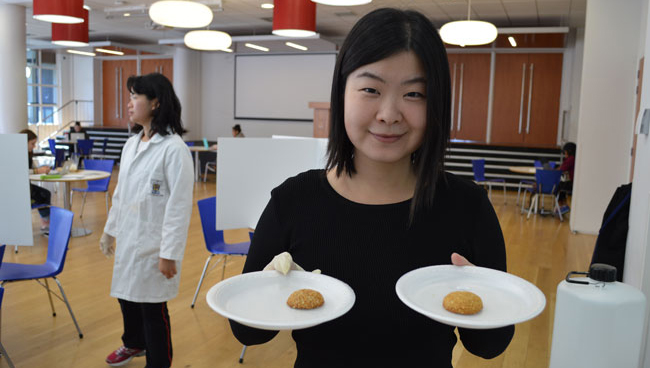 Mei Peng, a Lecturer in Sensory Science in the Department of Food Science, holds plates of Anzac biscuits at yesterday’s taste test.

On both sides of the Tasman, Kiwis and Aussies have long held firm that their beloved Anzac biscuits are the original, and tastier, version of the venerable biscuit.

Yesterday a group of researchers and students from the Department of Food Science set out to settle the debate once and for all with just over 200 staff and students taking part in a blind taste test held at the University Union.

Anzac biscuits are one of the rich traditions often associated with Anzac Day and were inspired by the hard, non-perishable biscuit sent to soldiers during the First World War.

"The Australian recipe contained 35 percent more sugar and it appears New Zealanders are suckers for sugar."

Participants in yesterday’s taste test sampled two biscuits each – one based on the Edmonds Cookery Book recipe (NZ) and another based on the Country Women’s Association Cookbook recipe (Australia) – before choosing which they preferred.

Taste test organiser – and the only person to know which biscuits were which – Mr Pat Silcock says that upon unlocking the testing codes and tallying the results, the Australian recipe was the winner with 62 percent preferring it over the Kiwi recipe.

“The Australian recipe contained 35 percent more sugar and it appears New Zealanders are suckers for sugar,” he says.

The same taste test was administered recently at Deakin University in Australia with similar results; 72 percent of participants preferred the home-grown, Australian recipe.

“We had a lot of fun organising the experiment and no doubt the students who ran the testing and those who participated had a positive experience as well,” he says.

Read more about the traditions of Anzac Day and the origins of the Anzac biscuit.