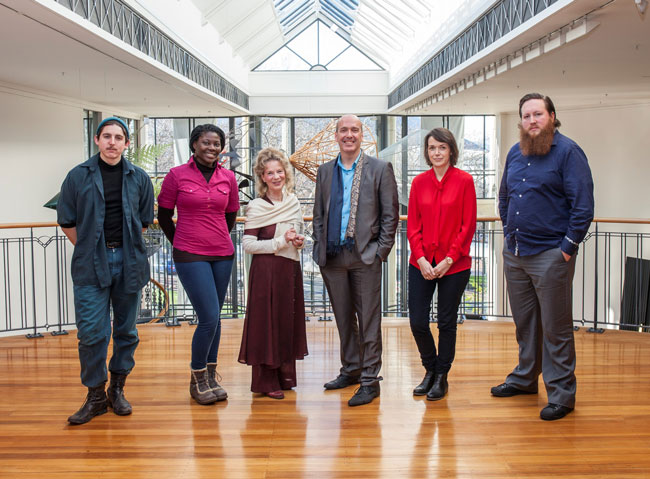 The Dunedin Public Art Gallery yesterday hosted the 2015 University of Otago Arts Fellows, giving around 60 members of the public the opportunity to meet the Fellows and ask questions about their work.

Director of Arts Festival Dunedin Nicholas McBryde chaired a discussion on the Fellows’ current projects, and their creative inspiration. He set the scene for the discussion with a quote from Charles Brasch, that “part of a university's proper business is to act as nurse to the arts, or, more exactly, to the imagination as it expresses itself in the arts and sciences. Imagination may flourish anywhere. But it should flourish as a matter of course in the university, for it is only through imaginative thinking that society grows, materially and intellectually.”

Frances Hodgkins Fellow John Ward Knox described his Fellowship as “a windfall of time and space and freedom” to create.

The Fellows spoke about where they gain inspiration from, often from the environment, and a number specifically mentioned the influence of the beautiful Otago Peninsula. They also praised the number of creative activities that Dunedin presents for the public, such as exhibitions and poetry readings.

Uzoamaka Nwankpa, Caroline Plummer Fellow in Community Dance had the audience standing and participating in some exercises as she talked about engaging the community in her work. Previously a community health nurse, Uzo plans to address prenatal and post-partum mood disorders as part of her current dance project.

Following the event attendees continued discussions as they mixed and mingled with the Fellows, enjoying an afternoon tea with cupcakes and macaroons.