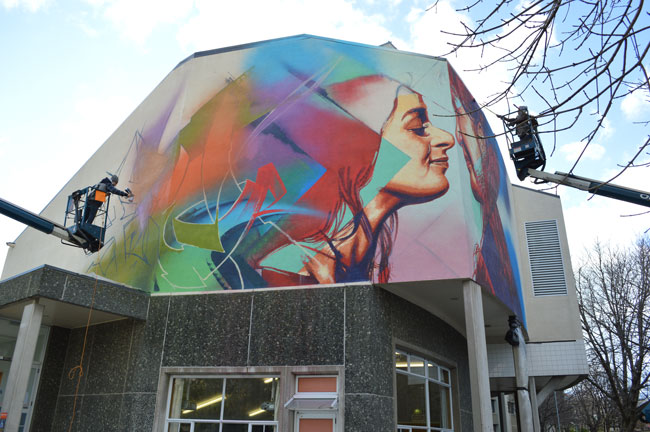 Canadian street artist Fluke (left) uses spray paint to add detail to the new mural while collaborator Talia Carin, a studio artist, uses a roller to add detail to one of the portraits featured in the piece.

Still several days away from completion, it is already plain to see the uplifting impact a new mural bedecking Castle Lecture Theatres is having on the Dunedin campus.

The work of international street artist Fluke and collaborator Talia Carin has been stopping passers-by in their tracks as the vivid artwork and concerted activity of the friendly, outgoing artists grab the attention of anyone in the vicinity.

The pair have been hard at work since 5 August on the massive street art piece commissioned by the Otago University Students’ Association (OUSA) as part of last week’s OUSA Art Week.

The artwork continues a campus beautification project initiated by OUSA in 2013 to have street artists featured on campus. It also supports the Dunedin Street Art project, which has seen a wide variety of local, national and international artists commissioned to paint walls around Dunedin over the past two years.

“We liked the idea of aiming high and bringing over a high calibre international artist this time around. It builds upon our first commission piece in 2013 by Sean Duffel who has now become well known across New Zealand,” OUSA Events Manager Dan Hendra says.

The project is a collaboration, with OUSA staff working closely with the University who are co-funding the project.

Vice-Chancellor Professor Harlene Hayne supports the initiative saying, “the project will showcase our campus as a vibrant, dynamic and creative space for students, staff and visitors. It will also build upon our already strong bond with Dunedin City”.

Fluke, a Canadian artist, was selected from a wide range of potential artists through a voting system amongst OUSA staff and executives. He is founder and president of a collective called A’shop, based in Canada, who work internationally on large scale murals.

Spectators are encouraged to stop by and watch the artists in action as the pair wrap up the project over the coming week. For those who love to take photos, use the hash-tag #dunedincampusart to create a portfolio of citizen photography of the event on social media.

The project has the support of the Dunedin Street Art Trust, who have provided expertise and input to assist the project along the way. Accessman, Resene and Gordon Harris Paints have kindly donated services and products towards the project.

The design of the mural encompasses traditional Māori symbolism to tell a story honouring the history of Dunedin City and the University of Otago. Further inspiration for the design is the hongi, the act of sharing breath with another. The image represents shared breath and knowledge, as well as the commitment of treating a visitor as one of your own. By employing dual styles of paint work, both a modern graffiti style and traditional brush work, the act of painting this art piece also emphasises the coming together of the traditional and the contemporary.