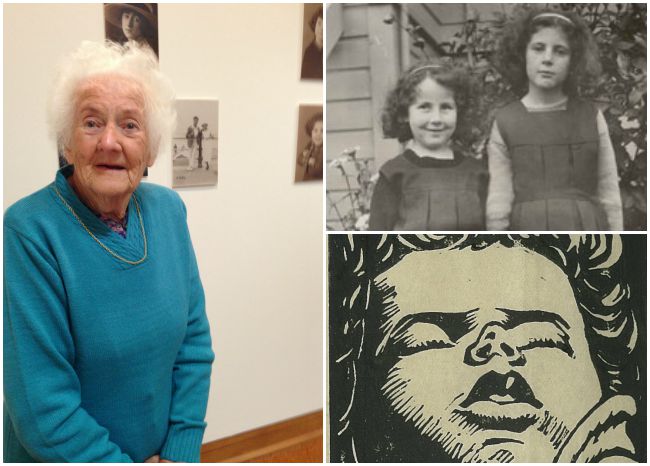 Sheila Allen (clockwise from left) at the exhibition opening earlier this month, with her sister Tui (left) as children, and in a woodblock print created by her father.

Having just completed the journey from her home in England, the 86-year-old daughter of the late William Henry Allen (1894-1988) stood with her walking stick in the University’s Hocken Gallery pointing excitedly at the paintings and photographs of herself, her sister and mother on the walls.

In a clear voice, Sheila Allen, the only surviving daughter of this influential artist and teacher, spontaneously began to retell the stories that had led to the creation of many of these photographs and paintings of friends and family - memories made more than half a century ago in Dunedin and Nelson when she was a girl growing up. It was as if the events surrounding their creation had happened only the day before.

“I remember when we were all painting in the one room, together, that’s when that painting was done,” she said, pointing with her stick at one of the 70 artworks on display, 30 of which were produced by Allen, aka Curly, who Sheila cared for at home in Essex until his death in 1988.

Sheila’s first glimpse at the exhibition showing all the works and photographs together at once was a moment as precious as the art itself – something unlikely to be seen again. The effervescent Sheila is the only living link between her teacher/artist father and the Avant Gard post-impressionist period in New Zealand’s art history that he so profoundly influenced. 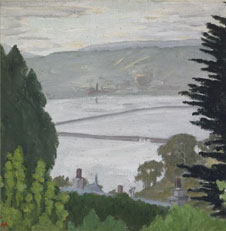 The exhibition, entitled W.H. Allen, the “La Trobe Effect”, extensively profiles his work and that of others he influenced – some now famous – New Zealand artists in the art world up to 70 years ago. It opened at the Hocken earlier this month.

William Allen’s role in their development was to foster a particular art style that was entirely new, even risqué, to the Victorian art that dominated. He was one of a group of British art teachers recruited in the 1920s by William Sanderson La Trobe, the nation’s Superintendent of Technical Education, to improve the quality of art education in New Zealand.

Their efforts were later coined the “La Trobe effect”, and Allen and his companion teacher Robert Field taught “modern” art first at Otago, and then in Nelson, which deeply impacted on the art scene in New Zealand.

“I’m proud of him,” Sheila says, “because he really encouraged people, which was a good thing, because people in New Zealand were quite isolated then, and they needed to have a broader view of the world,” she says.

"I’m proud of him, because he really encouraged people, which was a good thing, because people in New Zealand were quite isolated then, and they needed to have a broader view of the world."

Hocken Librarian Sharon Dell says the influence of Allen and his fellow La Trobe teachers produced landscapes and portraits in a style that was at first deeply unacceptable to painters and art societies in New Zealand – still entrenched in their Victorian style of art. The La Trobe artists also brought with them a rich social life where games, dancing, music and theatre were as important as art making, reading and discussion.

“Some of this country’s most respect artists including Toss Wooliston, Colin McCahon and his wife Anne Hamblett, Rodney Kennedy, Edgar Mansfield, H. V. Miller, Doris Lusk, Stewart Maclennan and A. H. McLintock, fell under the spell of their ideas, attitudes and techniques,” she said.

“The works in this exhibition bequeathed to the Hocken show that La Trobe influence even if the works don’t seem revolutionary to the contemporary eye.” 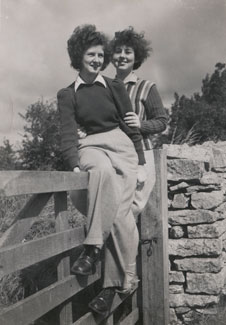 Sheila (left) with her sister Tui in their youth.

Sheila travelled from England to Dunedin especially to be at the opening of the exhibition. The artworks on display include several painted of her and her late younger sister, Tui, who bequeathed the family’s collection of archives along with the art, to “anyone who would pay the carriage.” The Hocken, appropriately given the strong Dunedin connection, took up the offer.

Sheila lived in Dunedin until aged four, when she moved with her mother, father and Tui, back to England for a new role for her father. The family returned to New Zealand for a teaching role in Nelson when she was seven, and she grew up there, leaving at age 20. She says her childhood in New Zealand was “idyllic,” yet she returned again to live out her years in the UK, and eventually had a career as an artist herself, training to be a silversmith in her 70s. But she thinks of herself as a New Zealander, and the kiwi accent is still faintly detectable. Her father “loved Dunedin” because he was adventurous, she says, fondly remembering trips to St Kilda beach as a child.

“I’m so pleased they’ve put on this exhibition and bringing back memories – because I knew when these paintings were painted,” she says.

Other artworks in the extensive collection on display have been borrowed privately, or from the Dunedin Public Art Gallery, The Suter Art Gallery and Te Papa.

The Tui Frowd bequest contains about 80 artworks including oil paintings and works on paper, and a large archival collection which includes letters, correspondence, photographs, catalogues and articles relating to William Allen.

The exhibition is open until 3 October.