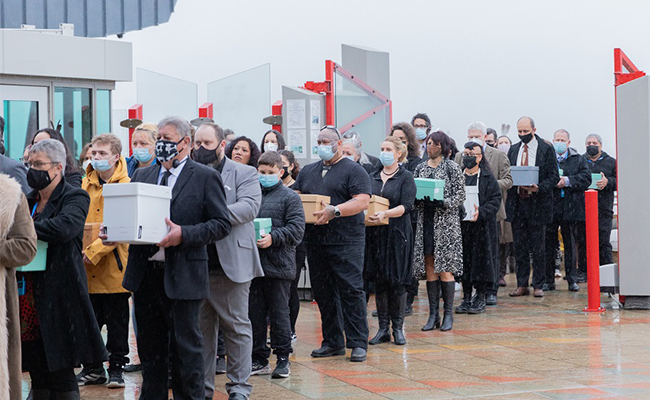 Acknowledging and apologising for the past at a hokomaurahiri (repatriation ceremony) of Kōimi T’chakat Moriori (Moriori skeletal remains) was an important part of the healing process, the University of Otago’s representative at the ceremony says.

Professor Hallie Buckley, of the Department of Anatomy, took part in the ceremony at Te Papa where 306 karāpuna kōimi (Moriori ancestral remains) were repatriated.

“We all stood up and told our story but also acknowledged and apologised for the past. The people representing Hokotehi Moriori Trust said to us, ‘None of you are personally responsible but we need to acknowledge that history.’

“I think it's an important part of the healing process to acknowledge and to actively seek to repatriate.”

The repatriation was the culmination of a great deal of work behind the scenes to repatriate Moriori remains to Te Papa before they are taken to Rēkohu (Chatham Islands).

Otago’s Anatomy department was formerly part of the Otago Medical School which had collected and retained both Māori and Moriori ancestral remains from the 1800s into the middle of the 1900s.

“We're in a situation now in Anatomy - and we have been for a number of years - where we're repatriating the kōiwi tangata/kōimi tchakat (human remains) that we have here,” Professor Buckley says.

In 2003, Ngāi Tahu and Kāi Tahu kōiwi tangata held by the University were transferred to Tūhura Otago Museum as part of an initiative driven by Kāi Tahu.

Prior to the transfer, Hokotehi Moriori Trust was open to receiving more information about their ancestors and the result was an 80-page report with details about age, health, diet and disease.

“The Trust was very happy for us to do that.”

Professor Buckley has also helped museums with their process of repatriation of Moriori remains by providing osteobiographical information on the karapuna.

The repatriation was a culmination of 15 years of research and negotiation by Moriori and the Karanga Aotearoa Repatriation Programme.

“It was an amazing day, very much a feeling of relief. Everybody was very relieved and very happy to be at that point, because it's taken a long time. Maui Solomon talked about how receiving their ancestors back was a big part of the healing process after a distressing history.”

The Moriori repatriation was part of a wider kaupapa and the Anatomy department was working closely with other mana whenua and the Otago Museum towards the repatriation of more kōiwi tangata.

“There is this history of collection and retention. We acknowledge and take responsibility for that and are actively seeking to work with mana whenua to repatriate their ancestors.