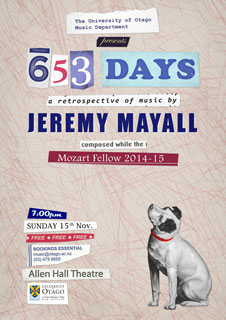 Come along to Mayall's concert on Sunday.

Mozart Fellow Jeremy Mayall will give a final concert this weekend, showcasing works composed during his time at the University of Otago.

Mayall has been Mozart Fellow for two years – and the concert title 653 days: a retrospective of music by Jeremy Mayall composed while the Mozart Fellow 2014-2015 celebrates the value of each of the days he has spent here.

“On Sunday I will have spent 653 Days as the Mozart Fellow; 653 days that have been a real honour and privilege. Just to be able to come to work each day and have the freedom to pursue any creative road I choose to travel. The opportunity to engage wholeheartedly in creative research, and the pleasure of being able to collaborate with a huge range of talented individuals. This concert is a celebration of that time.”

There have been a number of highlights for Mayall during his two years at Otago, including working on 14 albums of new music, 10 short films, two children's books, numerous chamber works (including Frosted Air Suite, Fourteen Moments for Three, Signature Asymmetry, and Journeys), interdisciplinary, multimedia performances like Flutter (a multi-sensory performance piece in the Otago Museum Tropical Rainforest), work with other Otago Arts Fellows, like Majella Cullinane on Cut Away The Masts, and Melinda Szymanik on a musical adaptation of The Song of Kauri and, most recently, working on the score to the new “Amazing Universe” planetarium show for the Otago Museum. 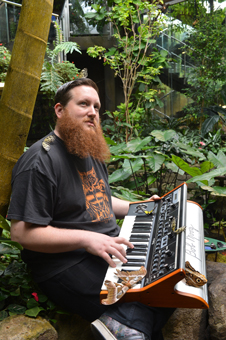 The concert, being held at Allen Hall Theatre at 7pm on Sunday, will feature a few favourite pieces from the past two years, but also a number of world premieres including: Frosted Air Suite for flute and electronics (winner of the 2015 Philip Neill Memorial Prize) played by Feby Idrus; Journeys for violin, electronics and video cube played by Tessa Petersen; L.O.Q.Shun a multimedia collaboration with Dan Inglis and Julia Booth; and Otakou Lullaby created with Alistair Fraser (taonga puoro) as a way of “saying goodnight to my time in Dunedin”, Mayall says.

Next year Mayall will contine to compose music, but beyond that he is still looking for other opportunities. As he recently graduated with his PhD he is on the look out for a lecturing position at a university as this will allow him to both “share knowledge and experience with the next generations of composers, as well as continuing to develop his creative practice-based research”.

The University’s 2016 Mozart Fellow is Dr Chris Gendall of Wellington.

"I wish Chris the best of luck as Mozart Fellow next year," Mayall says. "This is an amazing opportunity, and the music department has been hugely supportive. It is a great chance to really spend some quality focussed time on creating new creative work."