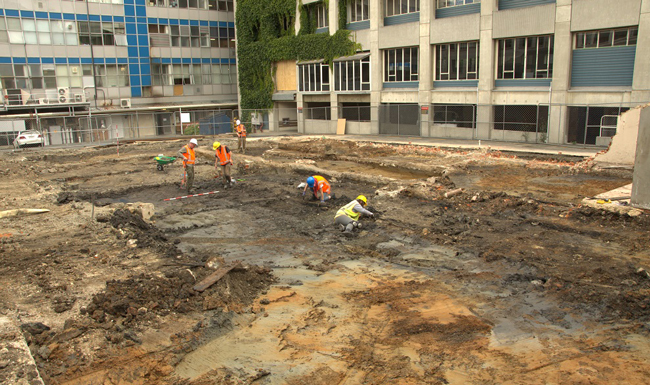 Archaeology staff examine the site of the former Barningham Building for relics of early Dunedin as part of the Dental School redevelopment. 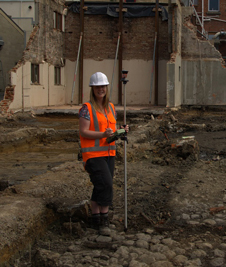 Artefacts painting a picture of some of Dunedin’s early residents have been unearthed by staff of Otago’s Department of Anthropology and Archaeology as the University’s Dental School redevelopment gets underway.

Early preparation work for the much anticipated redevelopment has identified the site as part of a once-bustling domestic and light-industrial centre of the still young but rapidly growing city of Dunedin.

Research Fellow Emma Brooks says early photos and plans show that from at least the 1860s the land behind the current Dental School contained shacks, workshops and houses as well as a set of buildings associated with the Victoria Foundry run by Barningham and Co in the late 19th century.

The University was required under the Heritage New Zealand Pouhere Taonga Act to commission an archaeological investigation of the site in order to identify, record and provide an interpretation of all earlier structures and work zones on the site and has been able to harness in-house expertise. The archaeological work is being carried out by a team from Southern Pacific Archaeological Research (SPAR), a research and consulting unit within the Department of Anthropology and Archaeology. The work is led by SPAR Director Professor Richard Walter, with other SPAR staff and graduate students. Ms Brooks is SPAR’s Research Manager.

“Careful planning between Property Services and the SPAR team has resulted in the commencement of the archaeological investigation of the site well ahead of the construction schedule to ensure that any possible delays as a consequence of archaeological finds can been avoided,” Ms Brooks says.

"This has provided a valuable training opportunity for many of our students who are planning careers as professional archaeologists."

“The archaeologists have started work underneath the Barningham Building (one of the former foundry buildings) which has recently been demolished and which until recently housed the Multi-Disciplinary Health Research Unit, and Property Services itself, prior to that,” she says.

Although the work has only just begun the team has already exposed several features associated with 19th century structures on the site including a cobblestone floor, rows of well-preserved timber posts, and timber-lined drains. Many artefacts have been recovered including many pairs of leather boots and shoes, clay pipes, bottles and ceramics and these have the potential to reveal information about the nature of activities that took place on the site.

Professor Walter says these archaeological finds contribute to our understanding of Dunedin’s past and help build up a picture of how early residents lived and worked.

“This was not a wealthy part of Dunedin and on this city block houses were crammed in with commercial and industrial activities.”

Once the artefacts are removed from the site they will be taken to the Archaeology Laboratories at the Department of Anthropology and Archaeology for processing. The artefacts and all the reports, plans and other data become a permanent resource for scholars of Dunedin history and archaeology.

“It is not often that you get to carry out an archaeological excavation right on your back doorstep,” Professor Walter says. “This has provided a valuable training opportunity for many of our students who are planning careers as professional archaeologists.”