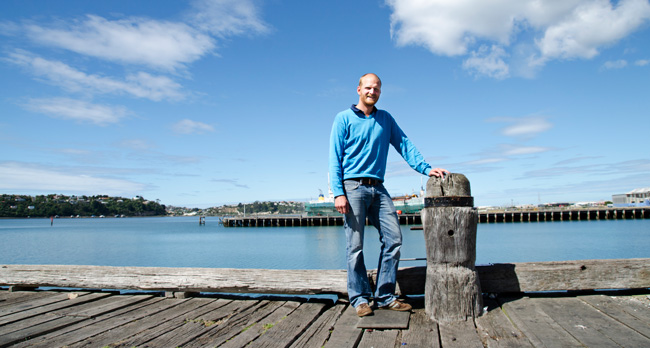 German visiting academic Senior Lecturer Dr Jan Lorenz Wilhelm will be helping to examine the uniqueness of Dunedin's waterfront and how its attributes could be reflected in future developments.

Academics, students, planners and members of the public are welcome to register for 'Friday on the Dunedin Waterfront: New ways of thinking for city planning,' which will run on 11 and 12 March. While there are no prerequisites for participating, he says attendees must come with an “open mind”.

“The focus is on creating a conceptual space that leads to new ways of thinking and talking about the area. The first [sessions] are about the importance of having time to look and feel and listen and really understanding what’s unique about the waterfront, and why and how people connect with it.”

Discussion will include an overview of relevant frameworks, including theory U (most often associated with MIT Boston) and systems thinking, he says.

He was motivated to hold the workshops after researching the long history of debate about Dunedin’s waterfront. Urban planners and the public may be able to clarify their “understanding of the deep value Dunedin’s waterfront” after examining the area’s basic sensory associations.

“This helps in not being blinded by developments in Auckland, Wellington or Vancouver, which all occurred in different contexts.

“Instead, using this approach, the emphasis is on exploring the waterfront’s uniqueness, and how these attributes can be reflected in future developments.”

Dr Wilhelm is on a seven month sabbatical from the University of Potsdam’s Institute of Geography until late March. While in New Zealand from Germany he has also researched earthquake memorials in Christchurch, such as the official national memorial site and artist Peter Majendie’s “powerful” 185 empty chair project.

His interviews with healthcare professionals, artists, planners and members of the public affected by Christchurch’s earthquakes concerned relationships between built environments and humans, and how different memorials functioned in the context of civic or personal “healing processes”.

“I’m fascinated with understandings of urban life. I say it’s like dealing with icebergs – under the surface there are so many complexities, and these all relate to the processes of how places are developed and how these dynamics change the way people connect to place, and other people.”

Friday on the Dunedin Waterfront: New ways of thinking for city planning