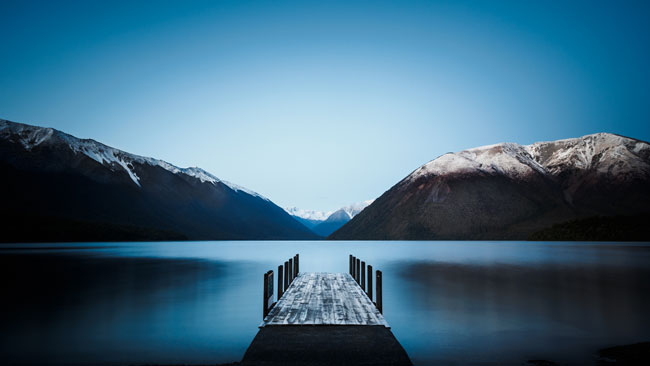 The winning photo in this year’s Bulletin Board Photo Competition was captured on a crisp early morning in St Arnaud along the shores of Lake Rotoiti on the South Island.

David Steer, an eConferencing Specialist at the Dunedin campus, took the photo using a special filter to achieve the desired effect.

“The photo was taken using a filter that lets less light into the lens so the photo could take 60 seconds to take, causing the effect on the water,” he says.

His photo was selected from nearly 100 images to take the top spot in the fourth annual competition. Second place went to Amber Hannah, a cryogenics lab technician at the University’s Hercus Taieri Resource Unit for her photo of Bertie the goat. Both Raelene Inglis, a Strategic Information and Research Analyst in the Division of Health Sciences, and Associate Professor Michael Robertson of the Faculty of Law, tied for third place with their photos of the Star building in Dunedin and a still-life of sheer curtains respectively.

While the total number of entries was down compared to years past, the judging panel agreed that the calibre of submissions was the strongest ever.

Marketing and Communications’ Senior Graphic Designer Luke Calder, who joined the judging panel for the first time, says he was blown away by the talent revealed in the submissions.

“These photos show an incredible creative streak that runs through Otago staff,” he says. “Everything from the subject to the angles and composition behind each photo delivered a truly high-quality field of entries for us to consider. It was such a challenge to choose our winners.”

Selection of a top three was so difficult, the panel opted to award two third-place winners for the first time in competition history.

“Even though picking our winners was difficult, I’m glad these photos are able to be shared across the University.”

The top 12 images can be viewed below, and will be turned into a digital calendar which will be released month by month beginning in January 2017.

“It was a freezing morning in St Arnaud last year, I just had the ducks for company as I waited for the sun to come up and catch the top of the mountains. The photo was taken using a filter that lets less light into the lens so the photo could take 60 seconds to take, causing the effect on the water.

“I've been taking photos for about three years, joining the Dunedin Photographic Society two years ago. My real obsession with photography coincided with moving to the Otago Peninsula, and shortly after buying a DSLR.” 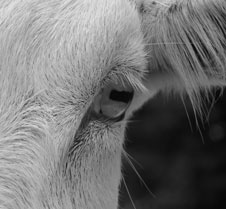 “I find goats eyes intriguing with their horizontal rectangular pupils; in this shot I tried to capture this detail while maintaining an interesting composition. Bertie was more than happy to pose for me in exchange for some sheep nuts.

“I don't have any formal training in photography, it's just a hobby at this stage!” 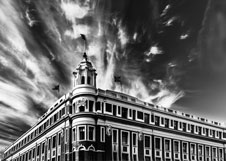 “My photo was taken one Sunday afternoon when I went for a walk around the streets near the Railway Station looking for interesting subject matter to photograph. As I crossed the road and looked up at the Star building, I was struck by cloud patterns and movement of the flags in particular which seemed to contrast with the solidity of the building. Getting the right angle was a little tricky though due to the traffic and tourists.

“I am self-taught when it comes to photography and I continue to upgrade my skills through reading, watching online videos and trying out new techniques. I am particularly drawn to photographing clouds and water, both of which we have in abundance in Dunedin.” 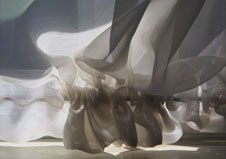 “This photograph was taken in Vancouver, in the stairway of an old hotel. I had carried our bags up to our room via the stairs, since there was no elevator. The stairs had windows with sheer curtains, and as I puffed by I noticed how the light was hitting them. As soon as I dumped the bags I unpacked my camera and went down to grab some shots before the light changed. I like the picture because it turns the curtains into an abstract image, and because it shows how ordinary things are often beautiful if you pay the proper kind of attention to them. I’ve been trying to pay the proper kind of photographic attention for a long time now, with varying results.”

“I took this photo in June last year at about 8.30pm on our first night in Scotland. The weather was suitably moody for Islay but I was surprised when the rainbow appeared behind the distillery as I was taking photos of it.

“After I took this photo we hopped in the car and headed towards Ardbeg Distillery which is a mile down the road in the direction of the rainbow. We stopped as Ardbeg came into view because the end of the rainbow was in the middle of the distillery grounds. I totally forgot about taking photos at this point and just sat watching until the clouds rolled back in and the rainbow faded. It was a magical start to our journey around the Scottish highlands and isles.”

“I always carry my camera in my bag and often pull it out to take photos as I walk around Dunedin. I was waiting for a bus one morning and since there was time I started walking down High Street. First I noticed the pink hydrangeas and then I saw water droplets resting on their petals. As the sun was rose the damp petals began to shimmer.

“When I moved to New Zealand I started experimenting with photography again, which I used to do when I as a teenager. I now often use my photos to help me write small pieces of poetry, remixing a large number of my photos and poems. This is one of the main reason why I now actively share my photos using a Creative Commons license so others can remix my photos. In the last year I have joined the Otago Photography Enthusiasts group, a Facebook group. This group has motivated me to attempt some of their regular challenges. A couple of times I have joined a few members on photograph excursions around Dunedin.” 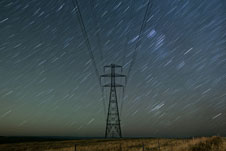 “Driving home from the Strath Taieri, I took some back roads to find a spot for astrophotography. I liked the pylon symmetry at this location, and planned a 30-minute exposure. A car drove past after 13 minutes so I stopped the capture, assuming the photo was ruined. But it turned out the headlights had neatly illuminated the foreground.

“I've had my DSLR camera for just over two years. I like experimenting with different techniques, especially long exposure landscape photography. I appreciate that star trails are unoriginal, but as a beginner I find it pretty exciting to capture something like this.”

“Wharariki is my favorite beach, the vast area and iconic Archway Islands make a really popular subject. I put myself in the photo to try and show the scale of the arches. I had taken lots with my wife in the photo until her enthusiasm had waned, but took this last one before heading home.” 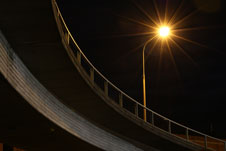 “I attended an all-day photography workshop on late last year which finished with a photoshoot at the overbridge off Cumberland St. We spent two hours there putting into practice what we had learned. It was an added bonus that I came away with a photo that I really liked.

“I have been into photography since I was about 12. In my late teens/early twenties I was most enthusiastic, first using my Dad’s old Pentax Spotmatic then getting a Nikon SLR for my 21st birthday. I dabbled with black and white photography and our laundry doubled as a darkroom for developing my own prints. I have continued to love photography but have waxed and waned over the years with the amount of time spent on it. I am currently going through a resurgence of interest and looking to improve my technical skills (hence the workshop).” 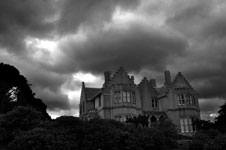 “I enjoy taking photos of Dunedin’s wonderful architecture, especially the gothic features, and was amazed to find out that I had lived here for seven years and had never seen “Castlamore" in Lovelock Avenue. I specifically chose a cloudy day so I could enhance the ‘moody’ gothic feel.

“I've always enjoyed taking photos and am self-taught. Working for a photographer in Dunedin doing office and Photoshop work improved my eye for composition.” 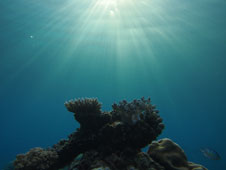 “This photo was taken on a research trip to PNG, diving on an active volcano. Carbon dioxide bubbles up from the sea floor, creating a natural whole-ecosystem laboratory with conditions we could see by the end of this century due to ocean acidification; if you look closely you can see CO2 bubbles in the photo. There was an algal bloom and a small chop on the surface this day, creating an eerily beautiful light on the reef.

“After spending a lot of time underwater for work and fun, I wanted to share the unique world with others so I bought a camera and housing three years ago; it's a great excuse to go diving.” 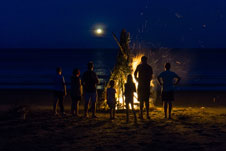 “This photo was taken serendipitously in January 2016 at Parapara in Golden Bay. The full moon had just risen above the horizon and as I was walking along the beach, I came across a family around a bonfire with the moon behind them. I had to handhold the shot at very slow shutter speed, but luckily managed to capture the scene successfully.

“I have only recently got back into photography in the last two years, after purchasing a mirrorless camera system, and undertaking a landscape photography course in April 2015. I am slowly learning the art of light and composition. It is a great hobby to pursue outside of work.”