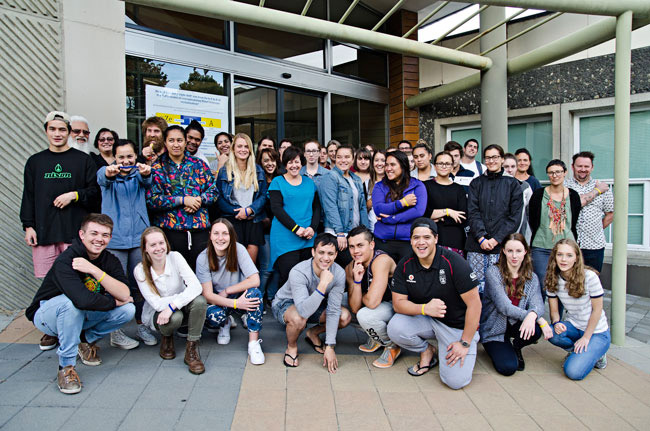 Te Kākano and Te Pihinga students and their pouako were on hand at Te Tumu School of Māori, Pacific & Indigenous Studies for this week's launch of He Toki Reo.

Nōku te korikori is a Ngāi Tahu proverb said to have been spoken by Ngāi Tahu ancestor Marukaitātea of the Kaikoura region, according to Mrs Megan Potiki, a lecturer in Te Tumu School of Māori, Pacific & Indigenous Studies.

“It was uttered in the context as a warning to his slave to follow him least he be killed by a stray enemy spear,” she says.

Meaning both “follow me and succeed” and “there is strength in unity”, the phrase also represents the ethos behind a new Māori language initiative launched this week at Te Tumu.

Mrs Tangiwai Rewi, Māori Studies Programme Co-ordinator in Te Tumu and one of the key organisers behind the new initiative – called He Toki Reo – says the aim of the project is to see te reo Māori become a living language on campus.

“Our team wanted to find creative ways to help promote te reo Māori and build a network of users and supporters, so we created wristbands to help visibly identify ambassadors of the Māori language on each campus,” she says.

“The idea is simple, when a band wearer sights another band wearer, hopefully this promotes Māori language interaction between the two. Alternatively, should someone spot a band wearer, we hope this encourages them to interact with that person in te reo, using what little language or words they have, confident they will be supported and knowing the band wearer is already an active supporter, promoter and user of the language.”

The distinctive silicone wristbands are not available for purchase. Instead, they are being distributed exclusively to staff and student who are active users and supporters of te reo Māori, in acknowledgement of their willingness to promote and use te reo on campus, not just orally but in all their communications.

(From left) Te Rina Keogh, Maramena Tuna, Tangiwai Rewi, and Tyrin Tutaki are among the first to don the new wristbands, indicating they are ‘right shifters’ and keen ambassadors of te reo Māori. .

“On a regular basis we know there are staff that use te reo in their emails and written correspondence, when they answer the telephone and at the beginnings of their seminars and presentations – even in their text messages. Those are the people that we want to acknowledge, so please tell us about them if they are ‘hiding’ in your departments, because we don’t know all of them – they are the ‘right shifters’ and champions of te reo-kōrero mai”.

The bands are being distributed by Te Tumu language staff in Dunedin, Parker Ormond in Southland, Suzanne Pitama in Christchurch, and Bridget Robson in Wellington.

There are only a limited supply at each campus, with about 60 already given out to Māori language students, who were very receptive to the initiative when they were surprised to be presented with their own bands this week. 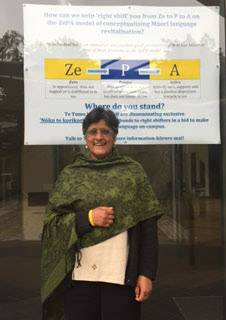 Humanities Web Co-ordinator and Marketing Administrator Tushar Robins is delighted to be the first recipient outside of Māori Studies of the ‘Noku te korikori – Ōtākou’ band.

The wristband scheme, says Mrs Rewi, is based on the ZePA model of conceptualising Māori language revitalisation.

Developed by researchers Professor Poia Rewi, Dean of Te Tumu, and Professor Rāwinia Higgins (former Te Tumu staff member and now Head of School of Māori Studies at Victoria University), the ZePA right-shifting model suggests that the largest challenge in revitalising the language is moving a population from minimal support, acceptance, or use (Zero stage) through to acceptance (Passive stage) and then to full usage (Active stage).

“We believe the wristbands are an excellent way to facilitate changing attitudes and foster a positive network foundation for those who wish to support our goal to make te reo Māori a living language across our campuses,” says Mrs Rewi.

If you would like more information about the initiative or wish to nominate an individual to receive a wristband, contact tangiwai.rewi@otago.ac.nz.

He Toki Reo is supported by a grant from the Office of Māori Development.