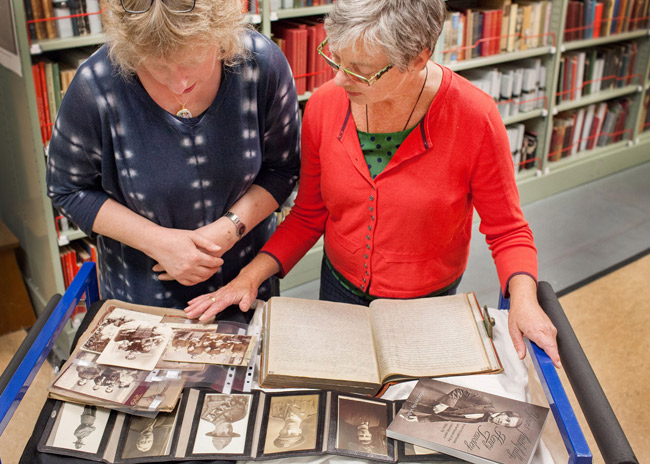 Looking back . . .  Hocken Curator of Archives Anna Blackman with Henry Tewsley’s great, great grand-daughter Ally McBride, who is the editor of a new book about him. Photo: Sharron Bennett.

The Hocken Library is delighted to have been given a “rich collection” of papers, letters and photographs of 19th century Dunedin business pioneer Henry Tewsley, says the Hocken’s Curator of Archives Anna Blackman.

The collection has been carefully preserved down through the generations of the family of donor Ally McBride (nee Coxhead), and now it has been gifted to the Hocken for preservation and research purposes.

Ms McBride, who is Henry Tewsley’s great, great grand-daughter, visited the Hocken last week with the boxes of papers, photographs, and a large bound letter-book that belonged to the prominent Dunedin manager of the historic Sargood, Son and Ewen soft-goods merchants. The material had survived thanks to the diligent care of Ally’s late mother, Dunedin’s Marian Coxhead, right down to written instructions of “don’t rest your cup of tea” on the old documents.

Sargood’s was a substantial textile and drapery business founded in 1864 by the Sargood family, a well-known Dunedin and Wanaka dynasty. At its height, the company was one of the leading firms of its type in Australia and New Zealand, with retail branches in both countries.

" . . . these men who came out from England set up business in an environment where many would struggle today."

Ms McBride has less use for the archive now she has used the material to produce her own family history book, Yours faithfully Henry Tewsley, from his personal letterbook of the colonial years 1854-78 (available at the University Book Shop). The book was a “collective family effort” which also involved the capabilities and skills of her two sisters, Imogen, who works at Otago University Press, and Gillian, who runs her own publishing business.

As a father of 14 children, Henry Tewsley was a Congregationalist, and a founding member of St John’s Church in Roslyn. After his first wife died, he married her sister, much to the consternation of the women in the local church community, who famously turned their backs and drew their skirts aside to protest the union when the couple arrived for church one Sunday. Henry left his beloved Congregationalist Church and the couple went on to have four more children (he had fathered ten with his late wife).

Henry and his large family lived in Sheen House, Roslyn - Sheen Street was later named after that half-acre property. He was also active in business groups, including the chamber of commerce and harbour board, and was an inaugural director of the Union Steamship Company. Tewsley Street, in the inner Harbour area, bears his name.

The now Wellington-based Ms McBride has enormous respect for what her ancestor achieved in his relatively short life.

“When you look back at the newspaper stories of the day, he attended most local meetings and always had something to say. He loved his new life here, and had wanted to leave the old ways in England behind him and live in a community which did not have class boundaries. He cared about people – he helped to provide people with education and with housing, and he looked after his workers.

“But it was tough; these men who came out from England set up business in an environment where many would struggle today,” she says.