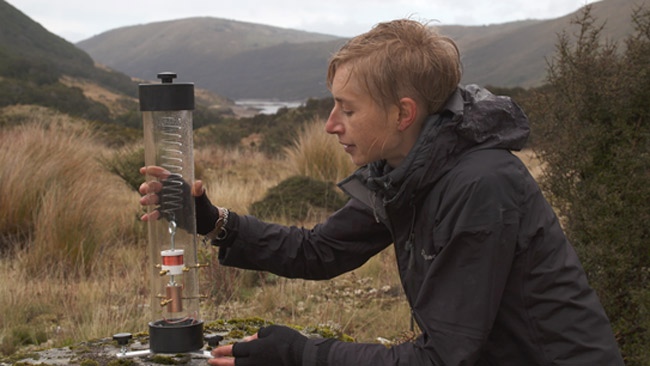 In the field ... Geology's Dr Virginia Toy demonstrates a seismometer on Beneath New Zealand.

Appearing in a television documentary series sparked a flood of texts to Dr Virginia Toy, including one saying she had shown that scientists are normal people who care deeply about their work - and are neither mad nor "boffins".

Geology’s Dr Toy says she was approached out-of-the-blue by the crew of Beneath New Zealand, to be part of the three-part documentary series exploring New Zealand’s natural landscape, the science behind its formation, and the natural hazards below its surface.

Dr Toy agreed to be in the recent one-hour episode on Prime about ‘rocks and quakes’ because she believes it is important to share the science happening in universities with the public, who can be affected by researchers’ findings.

Dr Toy says the more people know about their natural environment and the hazards that can affect them, the more informed their decisions will be about issues like fracking and off-shore drilling to extract oil and gas.

An informed public is also more likely to take notice of rules designed to protect people, including the requirement to earthquake-strengthen commercial buildings, and the Dunedin City Council’s proposed Second Generation District Plan, which highlights geological hazards, such as areas of potential liquefaction.

In the TV series, Dr Toy helped explain the ways tectonic plates form the earth’s surface in New Zealand. She also talked about subduction earthquakes, where one tectonic plate is thrust under another plate, creating geo-hazards which can include earthquake shaking and tsunamis.

Dr Toy says being involved with the television production taught her some new skills.

It was the first time she had acted to a script, so she picked up a lot about how to learn her lines, while also discovering the producer was happy for her to personalize them.

Dr Toy also quickly realised presenters have to act over-excited so they do not come across as dry and boring, and learned some lessons about which aspects of her science are understandable to non-experts.