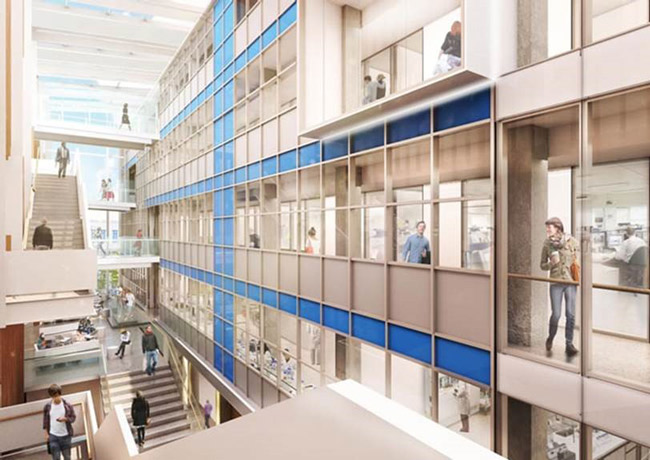 The future ... An artist's impression of the atrium which will link the Faculty of Dentristry's new School of Dentistry building and the refurbished Walsh Building.

Appointing a main contractor for the construction of Otago’s new $126 million Faculty of Dentistry will include evaluating the company’s “innovation and consideration” for the existing activities of the Faculty's School of Dentistry throughout the project.

The School provides the only dental training in New Zealand, and treats patients from the community as part of that training.

Site preparation for the new School has been progressing to schedule and can be seen on a time-lapse web-cam that constantly refreshes its images: http://www.otago.ac.nz/dentistry/about/new-building-project/index.html

Tasks completed so far include archaeological investigations of the site, and awarding the demolition contract for the West Wing of the Walsh Building, where work started late last month and is progressing well.

While demolition is underway, parts of the Walsh Building are closed for public safety reasons between 6.45am and 7.15pm daily, including Saturdays and Sundays. Authorised staff and students can access the affected clinics and offices outside those times, but not to work, only to retrieve folders, documents and other items needed for their jobs.

Those exclusions zones should reopen at 8am on 16 June, all going well. The end-date depends on the progress made with the demolition, but contractors are working every day so they can finish it as soon as possible.

Another artist's impression of the planned atrium.

Property Services Director Barry MacKay says detailed designs for the new clinical services building and refurbishment of the remainder of Walsh Building have been completed, and a preferred main contractor for the construction project should be secured within two months.

“We have put significant time in to planning the works in conjunction with the School’s operation. Everyone is incredibly excited about construction finally starting in the months ahead.”

Having demolition and construction taking place so close to University activities has sparked the need for a tight focus on communication and community liaison, so Property Services staff have been working hard to ensure they get it right, and will ramp up communication as construction progresses.

Property Services is currently revising how and where it will move Faculty staff affected by the construction and refurbishments, to create the most comfortable environment possible for people in the Walsh building.

Mr MacKay says large multi-national company Sirona Dental has been confirmed as the supplier for all the School’s dental and radiography equipment, so several partnering initiatives are being set up with the firm; including further education, research, product testing, and forums with other universities.

“This is seen as an exciting and strategic relationship for the University, now and for the years ahead.”

Auckland-based architectural firm Jasmax — which has experience with hospital-type facilities — was appointed last year to design the new School, with the aim of having the research and teaching facility reflect excellence in architecture, in keeping with values in the 2010 Campus Master Plan.

An artist's impression of the interior of the new School of Dentistry.

The heritage-listed, glass-curtain facade in Great King Street will be replaced with a replica facade that meets current weather-proofing and technology standards, while the mosaic north-facing wall will also be strengthened and renovated.

Both those projects will involve Salmond-Reed Heritage specialists, and the overall adaptive re-use project will include ongoing consultation at each stage with Heritage New Zealand, which lists the 1961 modernist building as a Category 1 historic place.

The new clinical building will house services currently in the Walsh Building, including radiology, oral surgery, paediatric dentistry, undergraduate clinics and orthodontics. In total, there will be 211 new dental chairs, 61 more than now.

That land is not only being cleared for the new School, but also for an 1800 square metre atrium and a “social space” that will link it to the Walsh Building.

• Now - West Wing demolition begun
• Now -16 June - Creation of exclusion zones in the Walsh Building for staff, student and patient safety while the remaining above-ground West Wing structure is demolished. During this time some staff and postgraduate students are in Dunedin Hospital's Children’s Pavilion and some in the former Centre for Science Communications building on Great King Street, opposite the Walsh Building.
• Now -16 June - Central lift core and rest of the West Wing coming down (weather dependent).
• 16 June - Staff and students temporarily housed in Dunedin Hospital's Children’s Pavilion and former Centre for Science Communications building return to the Walsh Building.
• 28 June-early August - West Wing foundations removed.
• Early August - Demolition scheduled for completion.
• July-August - Contractor for the School of Dentistry clinical building and Walsh Building refurbishment expected to be appointed.