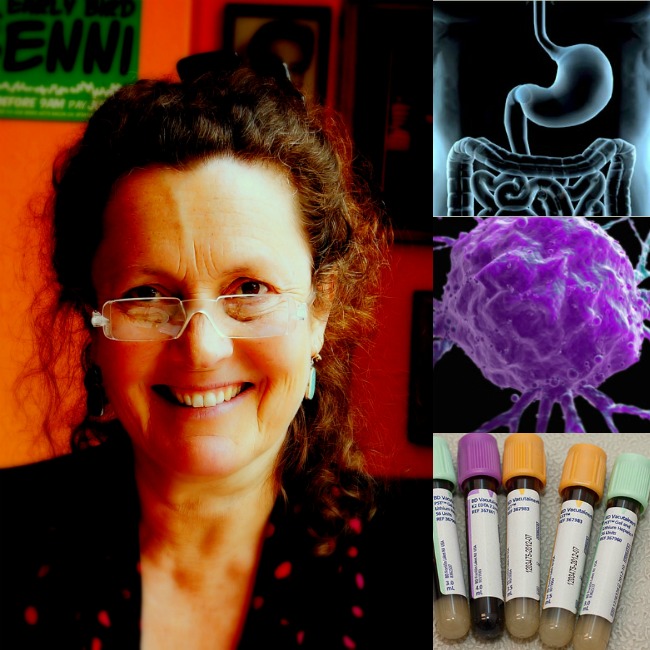 Associate Professor Sarah Derrett with (from top) images of a patient, a cancer cell and cancer tests. The later three photos were supplied by Bowel Cancer New Zealand.

As a volunteer on the Bowel Cancer New Zealand executive, Preventive and Social Medicine’s Associate Professor Sarah Derrett has discovered the motivating power of being part of a passionate group of people with clear, shared goals.

She is the latest person to feature in the Otago Bulletin Board’s new volunteer series, dedicated to staff who share their skills and time with the community.

A founding chair of Bowel Cancer New Zealand in 2010, Associate Professor Derrett is still on the executive, working as part of the patient and family-led charity in its mission to raise awareness and reduce the incidence of bowel cancer – New Zealand’s most common cancer, killing more than 100 people a month in this country.

“Bowel cancer is responsible for as many deaths as breast and prostate cancers combined. Yet it is detectable, treatable and beatable if caught in time. Bowel Cancer New Zealand has been calling, since 2010, for the introduction of a nationwide screening programme.”

"I was diagnosed with bowel cancer myself at 39; one of the 10 per cent diagnosed under 50 years of age."

“Our charity raises awareness and provides support for people with bowel cancer and their families. The charity has a Facebook support group, and organises national awareness campaigns”.

“I was diagnosed with bowel cancer myself at 39; one of the 10 per cent diagnosed under 50 years of age. More than 300 young New Zealanders are diagnosed each year. Our students and staff alike should be aware of signs and symptoms, and know not to hesitate in discussing symptoms with a GP.”

Associate Professor Derrett found her University and volunteer work connecting when she acted as an advisor to the recent Piper Project (the largest study of bowel cancer patients in New Zealand).

The Bowel Cancer New Zealand executive plans the charity’s strategy and Associate Professor Derrett says she has learned several skills through her volunteer work, including how to run campaigns, publish newsletters, establish an incorporated society, and develop a web site.
Her volunteer work is also a privilege.

“As a past patient, I was intimately familiar with my own story; it has been a privilege to learn from other peoples’ experiences, too. I have an increased awareness of bowel cancer patients’ and families’ empathy, resilience and determination. Bowel Cancer New Zealand is a fantastic charity to be part of.”