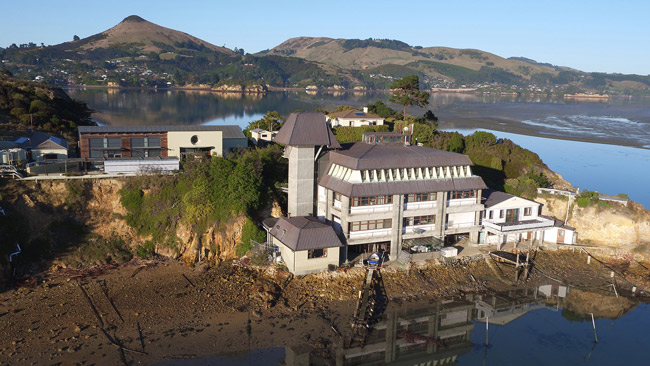 A large demolition project has finished at the University’s Portobello Marine Laboratory, so now building work on a new teaching laboratory, research aquarium and seawater system can begin.

Removing the 1960s two-storey public aquarium and teaching lab involved dismantling it piece by piece, loading those pieces into a skip, and repeatedly hauling the skip by crane up the cliff behind the building, Portobello Laboratory Manager Doug Mackie says. 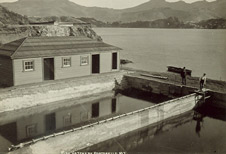 The fish hatchery that occupied the site from 1903 until the early 1950s, and its two holding ponds which are still being used today.

The harbourside building was an earthquake risk and could no longer cater for modern teaching standards so had been vacant for four years.

It was the smallest of the main buildings on the site; the neighbouring three-storey, 1987 building housing New Zealand’s premier marine research laboratory is still being used, and so is the New Zealand Marine Studies Centre , which is further up the hill and was built in 1996.

The ground floor of the new building will contain temperature and light-controlled rooms for research, an area dedicated to dive support, and lots of storage for equipment that is needed on the research vessels.

A 42-seat teaching laboratory will fill the first floor of the new building. It will have display tanks for teaching, seawater taps, and several ‘touch tanks’ – all resting on a section of specially reinforced floor, Dr Mackie says.

The existing system for distributing seawater to where it is needed around the entire site will also be upgraded, to improve the water quality and to pump 1.4 million litres a day instead of the existing 900,000 litres. Currently, the seawater supply is insufficient at times for staff and students’ experiments. 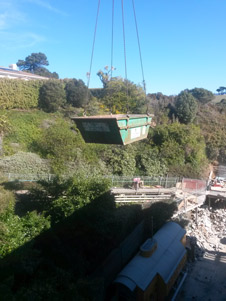 A crane with a skip used to remove parts of the public aquarium and teaching laboratory building as it was progressively dismantled at the bottom of the cliff.

Two large holding ponds underneath the existing three-storey lab will be refurbished as part of the project as well.

They were built in 1903 for a fish hatchery that occupied the site from 1903 until the University renovated the hatchery to create a Marine Biological Station in the early 1950s.

Portobello Laboratory Manager Doug Mackie says cracks in the bottom of the ponds not only let water leak into the harbour, but harbour water also gets into the ponds. This can affect research into fishes’ food because food comes in with the harbour water.

The ponds will be relined, but the exact nature of any other work will depend on what is found when the ponds are drained and examined.

Work at Portobello is expected to be finished in time for the start of the first semester next year.

Once all the work is completed, Mr Mackie is planning to hold an open day for the public, probably in late summer.